Search for a story 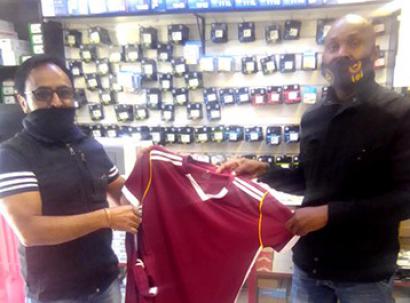 After staging soccer tournaments in Madombidzha village over the past six years, Mr Maanda Themeli has decided to establish a football club of his own. According to Themeli, the new club, DMT FC, was established two months ago and will be based at Madombidzha village.

Written by: Frank Mavhungu
Be the first to comment

Musina United beat Madridtas FC 8-7 in their SAFA Vhembe promotional playoff group-stage match to secure a place in the semi-final at the Tshifulanani Stadium on Saturday.

Vondwe Bullets are the regional champions

Vondwe XI Bullets are still in a celebratory mood after beating United Artists 5-4 in the final of the SAFA Vhembe promotional playoffs at the Tshifulanani Stadium on Sunday.

Maj Selaotswe Tlhakuli, a member of the South African National Defence Force (SANDF) based at the Makhado Air Force Base, is not too fazed about not making it to the 2021 World Triathlon Championship Series. Besides, he says, he can always try again next year.

Battle of the Stars to continue in Sasol Women’s League

After a break of two weeks, the teams affiliated to the Limpopo Stream of the Sasol Women’s League will resume their activities this weekend. Most of the matches will be played tomorrow, while only one will be seen on Sunday.

Now TTM have reason to celebrate

Tshakhuma Tsha Madzivhandila FC (TTM) have so many reasons to celebrate. The team have finished their league programme in the 12th position on the log standings, something the team’s head coach, Mr Dylan Kerr, has described as a great achievement. TTM were languishing at the bottom of the log when Mr Kerr took the risk of accepting the job offer from the club early this year.

Berea FC will not take part in the semi-final stage of the SAFA Vhembe promotional playoffs, but not because they had been booted out of the tournament. The Zwigodini-based side has been dismissed from the tournament for an act of misconduct.

The Top 8 matches of the MP & TTS Youth Day Soccer Tournament will take place at the Manavhela Grounds on Youth Day (16 June).

All roads will lead to the Makhuvha Stadium on Wednesday, 16 June, where the annual Nema Soccer Tournament will take place.

Tshifhiwa “Spider” Munyai of Makwarela beat his opponent, Khaya “Destroyer” Busakwe, via a technical knock-out (TKO) in the ninth round of their lightweight title fight on Friday night at the Sandton Convention Centre.

Two cousins from Maebani village have started a cricket club as a way of getting other youths involved in this sporting code, which is fairly unknown in rural areas.