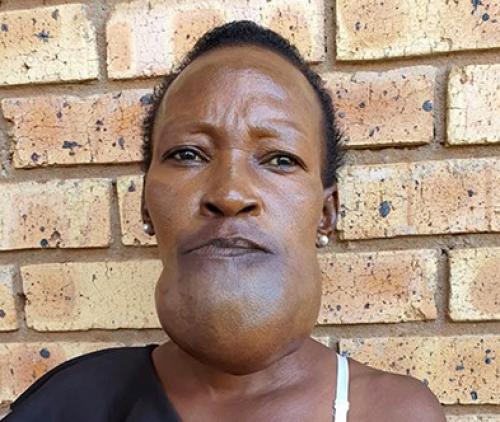 Meida Ramuhala’s whole life changed when she developed a tumour on her chin in 1999. She is pleading for help.

“Tumour on my chin is destroying my life”

Meida Ramuhala’s life changed drastically when she developed a tumour on her chin in 1999, when she was in the ninth grade. Today she is struggling to find employment, because the tumour on her chin has become so big that everyone who sees it is reluctant to employ her.

Ramuhala says she tried to speak to her doctor at the government hospital, to get him to recommend her for a social grant, but the doctor said that this was not possible since they did not know what the problem was.

“I have had many X-ray scans since 1999, but they are unable to see what is inside the tumour. What is it that they want to see before they can put me on the social grant payroll?” she asks.

Ramuhala recalls that she was at home when she first felt her chin itching. She scratched it and it started to swell out of proportion. She had to quit school because the pain was excruciating, to the extent that she could not focus. “When the pain started, I could hardly sleep,” she tells. “I spent sleepless nights, nursing my pain into the late hours of the night.”

She says the tumour had hardened and that she no longer feels the pain. “When I touch it, I feel nothing. It’s like I am touching a part that is not of my body but the next person’s.”

Ramuhala has been surviving on her 13-year-old daughter’s social grant. When she went to collect the grant last week, it had been stopped. She does not know why and is yet to visit SASSA’s offices to find out what could be the problem.

“I am really frustrated,” she cries. “I am without food. My daughter spoke to me last week and asked me to get her shoes for school and Christmas clothes. Her school shoes are worn out. She is in Grade 9. She is a very bright learner, but now I am afraid that this unfavourable situation might affect her ability to focus.”

Ramuhala, who does not have a place of her own to stay, says she is renting a place at R150 per month. “I have an empty stand of my own which my mother bought for me, but I cannot afford to buy materials and build a house, because I am neither earning an income nor receiving any social grant of my own,” she says. “My daughter is sad because we have no food at home. She’s only a child and I must provide for her. Now that I can’t do so, I feel like I am failing my only child. I am pleading for any Good Samaritans to help me because I am really suffering.”

The spokesperson for the Department of Health, Mr Neil Shikwambana, said that SASSA set its own standards and criteria for patients to qualify for social grants. However, he added that in cases like Ramuhala’s, the patient was allowed, even encouraged, to seek a second opinion from a doctor at another hospital or medical centre.