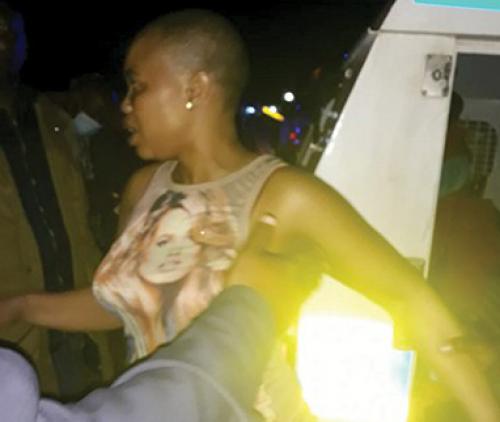 Mamorobela shortly after the incident being escourted to the police station. Photo supplied.

The life of the party?

The Makhado Municipality’s “partying” ANC councillor, Cllr Tebogo Mamorobela, was in the news again this week for all the wrong reasons. Once again, the main contributor to this prominent 39-year-old ANC member’s proverbial downfall appears to be alcohol.

Residents of Louis Trichardt woke up to the news on Sunday that Mamorobela had been involved in a vehicle accident on the corner of Jeppe and Anderson Street. The accident occurred between 04:00 and 05:00. Apparently, Mamorobela had first crashed into another vehicle before smashing her luxury Ford Ranger bakkie through a resident’s prefab fence. Mamorobela apparently tried her utmost to avoid being charged and arrested. Her alleged attempt to avoid prosecution was, however, to no avail. She was arrested by members of the Makhado SAPS and charged with, among other things, driving under the influence of alcohol.

In April this year, Mamorobela and two of her friends, Harold Muswobi (50) and Khathutshelo Matshusa (33), were arrested after a video of her partying with friends on her 39th birthday started circulating on social media. In the video, Mamorobela could be seen dancing with a bottle of liquor while mocking police minister Bheki Cele. Several other persons could also be seen in the video, socialising around a table filled with bottles of alcohol. This was amidst the Level 5 lockdown period, which prohibited all alcohol sales and gatherings such as birthday parties.

Following the damning video, Mamorobela and her two friends were arrested on charges of contravening the lockdown regulations. After their court appearance, they were released on R1 000 bail each. A resolution by the ANC of the Vhembe region was subsequently taken that Mamorobela should recuse herself from all activities of the municipality with immediate effect, until the matter was finalised by the court. She is still to appear in front of the municipality’s ethics committee.

Apart from being an Makhado Exco member as Head of Corporate Services, Mamorobela has also performed duties as acting mayor of the Makhado Municipality in the past. Her political career started at the South African Youth Council (SAYC) and the South African Students Congress (SASCO). She served in the ANCYL Provincial Executive Committee of Limpopo as an executive member from 2012 to 2014. She has served as the deputy chairperson of the ANC Makhado sub-region since 2018 and is the convener of the ANCWL Young Woman Desk of Limpopo.

The ANC clearly has big expectations of this young partying member whom they have obviously been grooming for bigger things. Her brushes with the law may prove to be problematic for the ruling party.

Mamorobela, however, has been quite successful in clearing the first hurdle and last month the charge of contravening the lockdown regulations against her was provisionally withdrawn in the magistrate’s court. The prosecuting authority explained that this was done to “allow the investigating officers to finish their investigation”. Should the case proceed, her defence will reportedly be that her actions were not in contravention of the lockdown regulations.

What also remains to be seen is whether anything will come of Mamorobela’s arrest on Sunday. Due to the high-profile nature of the case, journalists eagerly awaited her court appearance on Monday. This did not happen.

Questions about the circumstances surrounding Mamorobela’s accident, her arrest, and the reason why she had not appeared in court were referred to the police’s provincial spokesperson, Brig Motlafela Mojapelo. He did not respond.

The newspaper asked Ms Mashudu Malabi, liaison officer for the office of the Director of Public Prosecutions in Polokwane, to explain why Mamorobela had not appeared in court. Malabi said that, after consultation with the state prosecutor in the case, they had decided not to place Mamorobela’s case on the court roll to spare themselves possible embarrassment. She said that the elements of the offense [that had prompted the police to arrest Mamorobela for drunk driving] were not contained in the police docket. These are needed to link Mamorobela to the offense she has been charged with. The docket was therefore referred back to the police to complete correctly.

The police docket apparently has numerous other shortcomings that indicate shoddy police work. This might explain why the police are so reluctant to respond to questions regarding this high-profile case. In the meantime, nobody really knows what happened on the morning of 20 September on the corner of Jeppe and Anderson Street in the absence of an official police statement.

The woman whose fence Mamorobela wrecked, said on Monday that she is willing to forgive her for what had happened. “We have agreed that we are going to have a mother and daughter relationship when it comes to prayers," said Mercy Mudau, owner of a property.

Mudau was alerted by a neighbour about the accident. “I did not see how it happened, I only woke up when there were police and a lot of people around my place,” said Mudau. She was not interested in opening a case against the councillor, but rather to reshape her life.

According to Mudau when such incidents happen most communities jump to condemn or destroy whoever is involved in the accident. “When one is involved in an accident let us not celebrate. As a community we must ask ourselves what is wrong with our youth, our adults or everyone,” she said.

In reaction to Mamorobela’s latest shenanigans, the caucus leader of the Democratic Alliance (DA) in the Makhado Municipality, Cllr Brian Du Plooy, says the DA was not surprised to hear about her arrest. “The DA will write to the chairperson of the Ethics Committee of the Makhado Municipality and will request that Councillor Mamorobela’s hearing is now expedited, so that she may permanently be removed from her position. The people of Makhado deserve councillors who uphold the law and who set a good example, not a serial offender…” says Du Plooy in a press release.

The secretary of the Vhembe ANC region, Adv Anderson Mudunungu, confirmed on Wednesday that Mamorobela is still on suspension by the provincial ANC. “We as the Vhembe ANC are still waiting for a report on the allegations. Whatever the outcome, we are bound by the National Executive’s decision that any member facing criminal charges must be suspended,” said Mudunungu. He added that they still had to submit a report to the ANC’s provincial executive committee regarding the allegations against Mamorobela.