The ACT Awards comprises the Lifetime Achievement Award and ImpAct Award categories, and they are bestowed on individuals and organisations that have made a significant contribution to cultural life in South Africa.

“The award has uplifted my spirit as an artist based in the art-unfriendly environment,” Mainganye said. “It also feels like being given a pat on the shoulder, it's like hearing a divine voice that says 'the big Brother is watching you'. And the ceremony itself has afforded me the opportunity to share the stage with great minds in different art forms, like Prof Njabulo Ndebele and Thokho Ntshinga, who were recognised for their oeuvres in literature and theatre respectively.”

The award consists of a trophy and a cash prize. Nedbank sponsored the Lifetime Achievement Award for Visual Arts, which Mainganye received.

Mainganye has travelled most European countries where he exhibited his work and conducted art masterclasses. Even here at home, he is regarded as a great art teacher who has impacted on many young and older artists' lives, the very artists who are today known and celebrated in most parts of the world.

“The number of artists and students that I have mentored is countless,” he said. “I have helped both the determined students and what I would regard as the art pioneers in our region at different levels. I have been some kind of 'brother's keeper', making sure that all art information is shared among the artists.”

He has been teaching art to the wider community since 1998, with students coming from as far away as Tzaneen. Among them is Jan Tshikhuthula, who has had made huge strides in printmaking and pastel drawing.

“My gratitude goes to Prof Kim Berman for absorbing most of my students for further training in printmaking,” he said.

This seasoned artist has a message for the young and talented generation of artists: “Please stop singing the song 'There's no job!'; rather say, 'There's no money!', and get up to start doing something positive about it. Be innovative!”

He said that he was worried about the mythical perception that art was for the less intelligent. “If that were the case, why does most of the so-called civilised world put more emphasis on it?” he said. “Going through the congratulatory messages just after the awards, I was really impressed by what Nathi Gumede of the Art Bank said. He hinted that we are not recognised in our own province and yet the bulk of the most outstanding sculptures come from the Vhembe region.”

Mainganye stated that it was sad to know how culturally rich the Vhembe region was, with art collectors and educators flocking from all over the world to feast on what Vhembe people tend to ignore. “I somehow understand the reason why Rudzani Nemasetoni decided to stay in the 'Big Apple' (New York) and became an American citizen rather than starving in Mzanzi (South Africa),” he said. “However, I find much purpose in my work and the fact that I am continuing to contribute towards the SA art industry.” 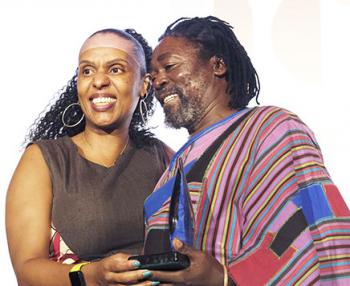