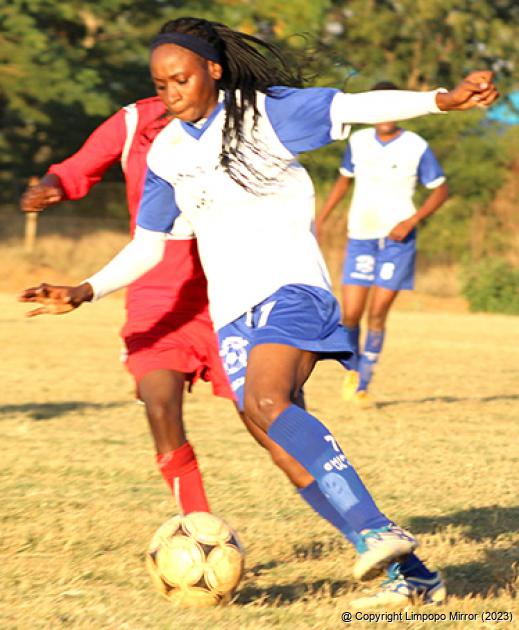 Khodani “Maggie” Ratshalingwa was a marvel to watch when her team, Chippas United Ladies, brutally crushed Merwe United Ladies 4-0 in their Sasol Women’s League match at the Makhuvha Stadium on Sunday afternoon. Ratshalingwa scored a hat trick in the game.

The first half was characterised by wasted scoring opportunities. Merwe did not seem to have much appetite for goals in the game. They played defensive football for the better part of the game. Chippas did not lose hope, despite the fact that Merwe’s defence was rock solid. They continued to play their normal attacking football, creating some dangerous moves from the middle of the park. The scoreboard was still blank when the teams adjourned for the half-time break.

The home side approached the last half with more self-confidence, forcing the visitors from Malamulele to abandon their positions and pack themselves at the far back. The referee, Ms Vhahangwele Nembaleni, flashed only one yellow card in the game. Molobela Mphegela of Chippas was booked, following an ugly tackle on Ripfumelo Mabaso.

Mabaso sustained a serious injury in the incident, and she was replaced with Carlifonia Maluleke. Mabaso’s departure left an opening in the visitors’ defence. Chippas took advantage of that and scored two goals within the space of 10 minutes. Lethabo Sello blasted in a rocket, following scramble within the Merwe danger area. A defender of Merwe handled the ball within her own penalty area, prompting the referee to award a penalty to Chippas. Ratshalingwa made no mistake from the white spot.

Merwe lost shape at the back soon after the Chippas’ second goal. Ratshalingwa beat the offside trap and scored the third in the 78th minute. She completed her hat trick with a ground cutter in the dying minutes of the game.