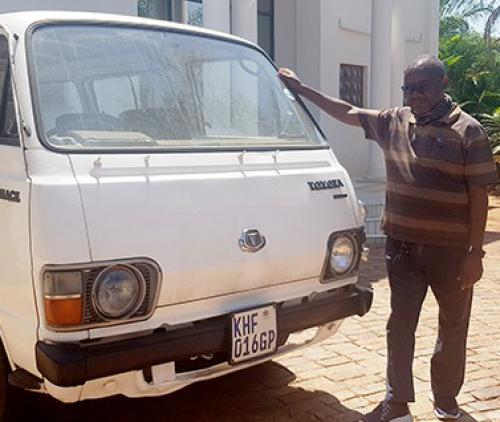 This classic Hi-Ace can still take you places

When one thinks of classic cars, the first image that comes to mind is an open-top roadster, preferably with spoke wheels and iconic names such as Austin Healey, Bentley, or Aston Martin. Many of the vehicles that we grew up with, however, are nowadays also considered to be classics and well-worth preserving for future generations.

One such collector of “modern-day” classics is Musina businessman Mr Moses Matshivha. In his collection of vehicles, he has a 1980 Toyota Hi-Ace. He is especially proud of this 16-seater workhorse that helped change the dynamics of public transport on the African continent.

The Hi-Ace was developed by Toyota Auto Body, a company subcontracting for Toyota, in the late 1960s. When the “small van” was introduced in 1967, it was quite revolutionary in the Japanese market. The vehicle was offered as a small delivery truck (or bakkie as we would describe it), a delivery van and a stretched commuter vehicle. It made its first appearance in South Africa around 1969, when the eight-seater version was used as public transport vehicles.

Mr Matshivha’s Hi-Ace is part of the second generation of these vehicles, introduced in 1977. It featured a longer and more streamlined cab with single headlights. The big bonus was that it could transport up to 15 passengers. In addition to the petrol engines (a choice between 1600, 1800 and 2000), a 2.2-litre diesel engine was offered in certain markets.

Cars need to be driven to be fully appreciated and Matshivha’s Hi-ace is no exception. He is also a pastor of the local King and Saviour Church and uses his old vintage combi to drive church members whenever they go on church trips. Even when modern types of transport have been hired for them, church members always insist on using this 1980 16-seater vehicle.

Matshivha says he enjoys riding in his classic combi because of its reliability. “The car is very good and roadworthy. It has never broken down on the way because it is well maintained. It has never been modified and everything in it is original. It gives me pleasure driving this car because I know that it never disappoints.”

He says one other advantage of this old vehicle is that the maintenance cost is very low. “Its two-litre engine is still intact and in good running condition. Unlike modern cars, the fuel consumption of this car is relatively low, but it will take you anywhere you want without any disappointments. I have been in various places using this car and came back home without any worries,” he says.

Matshivha says he also enjoys the power of the engine, especially when going uphill. “Other motorists just wave at me in disbelief when I overtake them on the roads,” he says.

Matshivha says the secret behind a car’s long life is to take good care of it and service it at required intervals. “You do not wait for the car to give you problems in order to service it. It is also very important to take your car to credible dealers who will do professional work on your car.”