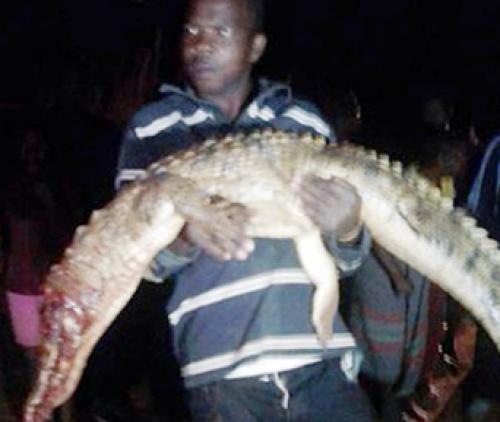 Early January 2019, a mature leopard was allegedly spotted in the village, but conservation officials sent to investigate could not find any trace of it. The whereabouts of the vicious cat that sent shockwaves through the village are not known till now.

As if that was not enough, for months now, residents of Itsani Maguluvheni outside Thohoyandou have been complaining about a crocodile that came out mostly in the dark.

The crocodile is believed to have come from the bushes at a local project. The residents allege that the crocodile has terrorized the local community for a long time and many feared walking at night.

Last Wednesday evening, their fears became a reality when a community member met the deadly animal, which was about to enter a local house. Terrified community members soon mobilised themselves and killed the crocodile.

Mr Michael Gumula of the local SANCO said the sight of the crocodile had sent shockwaves in the village. “We do not understand what is happening here. First it was a leopard and now it is a crocodile. Residents are not safe here. We are just happy that no one was hurt by this creature.”

He said that the community members should refrain from walking at night and they should “immediately report any sight of these dangerous wild animals to the police instead of confronting them or killing them as that might put their lives in danger”.

Another local resident, who preferred anonymity, said the sight of the crocodile in a village might be a sign of witchcraft. A traditional healer, Mr Matamba Mamuremi, said the presence of wild animals such as crocodiles in inhabited areas meant something in the village. “The traditional leader of the area should call all senior members of the royal family together and seek a powerful traditional healer who will restore peace in the area,” he added.

Mr Burcels Napo of the Department of Economic Development, Environment and Tourism Limpopo said several reasons existed why crocodiles might be found in residential areas. He said it must have been moving to another habitat or looking for food.

He said they were competing for food and the old ones would chase away the young to take control of the food.