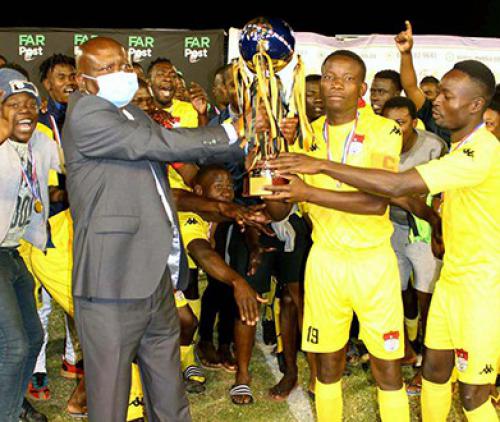 The executive mayor of Vhembe District Municipality, Cllr Dowelani Nenguda, hands over a floating trophy to the captain of Emmanuel FC, Sipho Rikhotso (middle), while the other players and officials look on. Photo: Frank Mavhungu.

Vondwe XI Bullets will be campaigning in the ABC Motsepe League when the league programme for the new season starts next month. They finished in the second position on the log standings during the SAB League provincial promotional playoff tournament that was staged at the Thohoyandou Stadium over the past weekend.

The top two teams in the tournament, Emmanuel FC from Mopani District and XI Bullets, got promoted.

The executive mayor of Vhembe District Municipality, Cllr Dowelani Nenguda, who was among the dignitaries who graced the prize-giving ceremony held at the stadium shortly after the final game, could not hide his excitement. He repeatedly stated that Vondwe XI Bullets had done Vhembe District proud. He said that he knew that running a soccer team without a sponsor was an expensive exercise and promised that the municipality would look into the possibility of assisting the football clubs representing his district at different levels.

During the prize-giving ceremony, the president of SAFA Vhembe Regional Association, Mr George Kubayi, stated that Vondwe XI Bullets had proved all the critics wrong by making the grade in the provincial promotional playoffs in their first attempt. He said that a number of teams, including Mpheni Home Defenders, Mukula Young Santos and Madridtas FC, had represented his region in the same event over the past years and come back with empty hands.

Vondwe XI Bullets won three of the four matches they played in the tournament and only lost one. They beat Vuka Hungry Tigers 3-1, Mamatho United FC 3-2, Greenhouse FC 3-0 and lost 1-2 to Emmanuel FC.