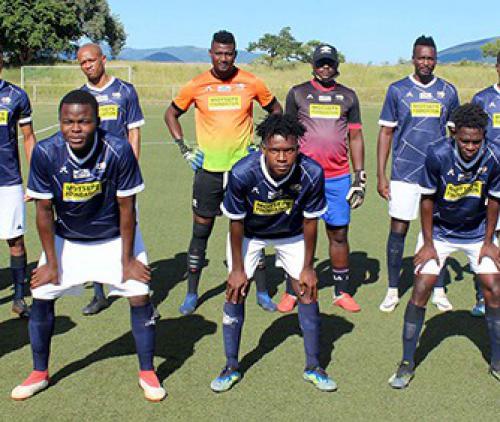 Mikhado and TRON in Vhembe derby

Teams affiliated with the Limpopo Stream of the ABC Motsepe League will commence with their second-round league activities this weekend. Whether Tshakhuma RO Nandilani (TRON) will have enough strength to stop Mikhado FC when they meet at the Louis Hoërskool grounds tomorrow afternoon remains to be seen.

Mikhado are still to lose a league match this season. Ikwasha Fhedzi, as they are commonly known, are currently leading the pack. Mikhado beat TRON 1-0 in their first-round league match at the Rabali Stadium on Saturday, 6 March. TRON are one of the hot league-title chasers. They are currently lying in the fourth place on the log standings.

The combination of Gift Nemutandani, Fhumulani Mushavhanamadi and Emmanuel Rambau in TRON’s midfield is expected to keep the defenders of Mikhado busy from the onset to the end. On the other hand, TRON must keep an eye on the strikers of Mikhado, Rendani Thavhana, Funeka Mafa, and Lavhelesani Murema or else they will not see any valuable league points.

Venda Football Academy (VFA) will entertain Ollesdal FC at the Tshifudi Stadium. They played to a 2-2 draw in their first-round league match at the Seshego Stadium. Giyani Happy Boys will host Makotopong Brazilians at the Xikukwani Stadium outside Giyani. Munaca FC will play against Ablex United at the Louis Trichardt Show Grounds.

Eleven Fast Tigers will visit Magezi FC at the Manamela Stadium outside Polokwane. Polokwane Sports Academy will take on Ngwabe City Motors at the Old Peter Mokaba Stadium. The match between Mighty FC and Berachah Valley FC will be played at the Seshego Stadium, while Denilton Callies will lock horns with Ditlou FC at the Groblersdal Stadium.