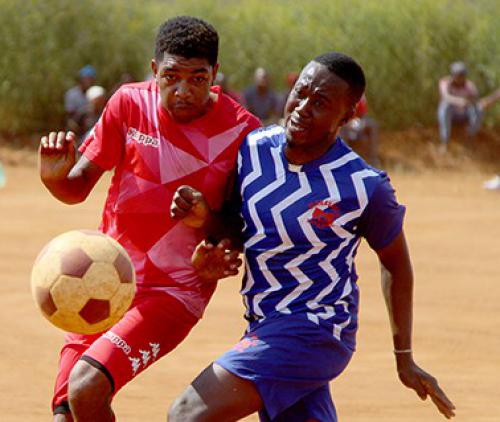 Gundo Mauluma (left) of Try Again and Takalani Rabulanyana fight for possession of the ball.

Madombidzha Try Again were crowned as the champions of the MJN Foundation Top 8 competition when they beat Manavhela Black Aces 5-4 in the final match played at the Madombidzha Grounds on Sunday.

The winner had to be determined by penalty shoot-out, after the two teams had played to a goalless draw in the 90 minutes of normal time.

Try Again took the game to Aces from the first whistle, with their midfielders demonstrating a spirit of commitment by dishing out telling passes to the frontrunners. They could have sealed the game within the first 10 minutes, but their strikers were not accurate and missed opportunities.

Try Again’s right flank, Rotshidzwa Phathela, had his chance in the 15th minute after receiving a brilliant pass from Gundo Mauluma, but he shot aimlessly from close range and the ball went wide.

The referee flashed the first yellow card in the 40th minute. Takalani Rabulanyana of Aces obstructed Thomas Funzani and the referee was lenient enough to let him go with yellow.

Early in the second half, Try Again introduced Contino Nwanamidwa for Rudzani Rambau. Aces’ initial spirit of commitment faded, and their backline started to leak. Try Again had a taste of bad luck in the 86th minute when Thomas Funzani shot into the hands of the keeper, Mbavhalelo Mufamadi, from the penalty area.

The champions, Try Again, went home with R5 000, a trophy and gold medals. The runners up, Aces, collected R3 000 and silver medals.