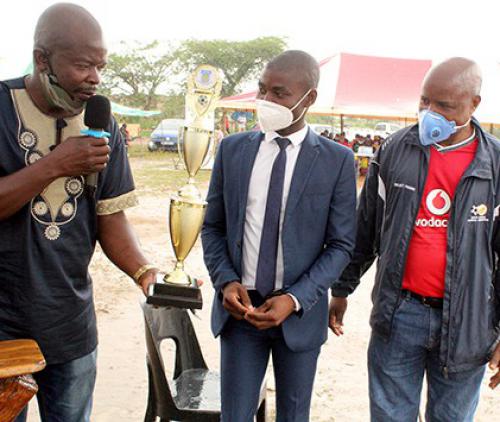 Local soccer referee Jelly Chavani received a trophy from Cllr Sipho Masuka of the Makhado Municipality for his hard work and dedication. Also in the photo is Cllr Moses Maluleke.

The community of Chavani and surrounding areas presented an honorary certificate and trophy to the young Premier Soccer League referee, Jelly Chavani (24), during a function held on 26 December. Chavani received a special award from the Limpopo MEC last year during the Limpopo Sports Awards.

“The community has identified the need to honour Mr Jelly Chavani, who symbolises hard work and dedication,” said the community representative, Mr Simon Mthombeni. “Most young people will surely identify with Chavani in that he too is still a young man whose passion for developing his fellow youths keeps him busy. He has inspired many children within the community and surrounding villages,” Mthombeni said.

Chavani said he was overwhelmed by the occasion. “More importantly, I am grateful to the village for showing me so much love and support as their son. I hope this will inspire young people from this community to work hard and know that it is possible for every child to achieve their dreams, as long as they remain disciplined,” Chavani said. “It was an honour for me, as it came unexpectedly,” he said. He indicated that his aim was to see himself officiating during international matches in three years’ time.

He encouraged the youth to take education seriously, so that they can face the challenges of the future with ease. He said setting realistic goals that could be achieved within a given period was important.