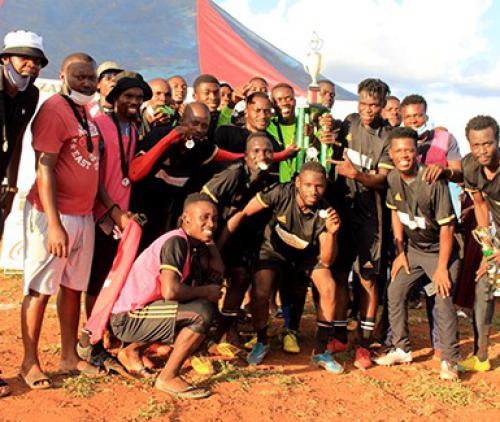 The players and officials of Mninginisi All Stars celebrate with the team's trophy after the ceremony.

Mninginisi All Stars are the new Zama Zama champions

Members of the Mninginisi All Stars Football Club are still in celebratory mood. They were crowned the champions for the Zama Zama Sports Challenge at the Homu 14b Sports Grounds last Thursday, 31 December. This after they beat Homu Fighters 1-0 in the final.

All Stars were presented with a cash prize of R45 000, gold medals and a floating trophy during a ceremony held at the grounds shortly after the final game.

Homu Fighters took home cash amounting to R20 000 and silver medals. Teams booted out of the tournament in the semi-final stage, Ngove Masipala FC and Giyani Happy Boys, were each presented with cash prizes of R10 000.

In the ladies’ category, Tshakhuma Tsha Madzivhandila (TTM) Ladies were crowned the champions. They beat Maindis Ladies FC 5-4 in the final earlier that day. TTM received a cash prize of R11 000, gold medals and a floating trophy during the ceremony. The runners-up, Maindis Ladies, became R5 500 richer, apart from the silver medals they were presented with. Teams booted out of the tournament in the semi-final stage, Giyani Zinjiva Ladies and Shayandima Morning Stars, received cash prizes of R2 500 each.

Malamulele Masters were crowned the champions in the masters’ category. They beat Nwamankena Masters 5-4 in the final. The winner was determined through penalty shootout as the scoreboard was still blank when regulation time came to an end.

Lufule Netball Club were the champions in the netball category. They beat Mukondeni Netball Club in the final to lift the trophy.

Tshifhiwa Mmboi of Malamulele Masters was nominated the best player of the tournament. He was presented with a trophy.

The best player of the tournament, Tshifhiwa Mmboi, displays his award with one of the sponsors, Mr Tinyiko Shivuri.