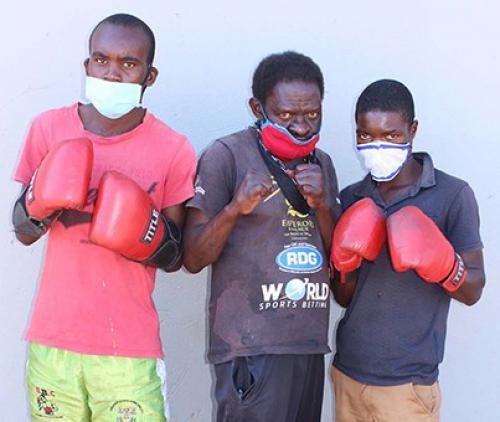 Mr John Nemakonde (middle) poses for a photo with two of his boxers, Ishmael Makhado (left) and Maanda Mathaba.

Boxers knocked down by lockdown

Not only is the national lockdown affecting the business sector, but boxers have also been hit hard.

According to the founder member of the Sibasa Boxing Club, Mr John Nemakonde, his boxers are battling to make ends meet in the national lockdown.

“Boxers are paid per fight, which implies no fight, no pay,” said Nemakonde.

He further stated that the only female boxer from his club, Ryder Muleba, was supposed to have fought against an opponent from the Eastern Cape early this year and that the fight had not materialised. He revealed that Muleba had developed some health challenges on the day of the fight, a condition that had forced her to withdraw from the fight at the eleventh hour.

He reiterated that Ishmael Makhado, who had turned professional this year, had been gearing himself up for a professional tournament that was supposed to have been staged at Ha-Rabali in the Nzhelele Valley last month, when the lockdown was announced. Nemakonde further stated that his other boxers who had been hit hard by the lockdown were Jansen Mudzanani and Dion Mmbubana.

According to him, Mmbubana and Mudzanani were supposed to be travelling to Mdantsane in the Eastern Cape in August, but the tournament was cancelled because of the pandemic.