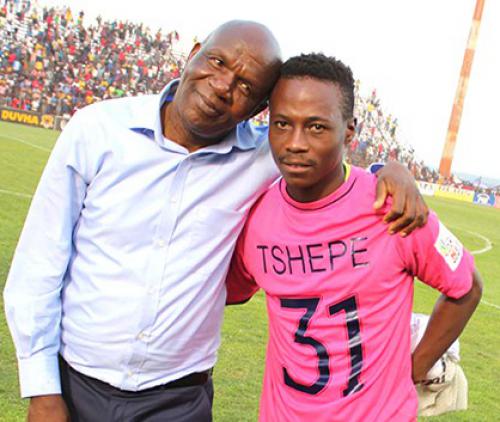 The relationship between Black Leopards and player Karabo Tshepe is something of the past. According to the 31-year-old striker, he received a letter from the club last Wednesday, 11 March, informing him of his dismissal.

According to him, the problem started when the team was about to fly to Cape Town for their league match against Cape Town City two months ago.

He said that he had requested family-responsibility leave to go and take care of his pregnant wife. He revealed that his wife was due to deliver and that prompted him to request three days’ family responsibility leave. According to him, his request fell on deaf ears. He admitted that he decided to leave the camp, despite the fact that the leave was not approved.

He further stated that he had returned to the camp after his wife had given birth to a baby girl on 31 January. Tshepe stated that, upon his return to the camp, he had been served with a letter notifying him about his suspension without pay. Tshepe further indicated that the club had taken far too long to summon him to a disciplinary enquiry, even though they had known that he had been suspended without pay.

According to him, the club again took a long time to notify him about the verdict after he had appeared before the disciplinary committee. He said that he had been ordered to pay a fine of R8 000, apart from the fact that he had once again been informed that his contract had been terminated with immediate effect.

The angry sharpshooter revealed that it had come as a shock to him when the club had terminated his contract as his only sin had been to take care of his family.

Asked about his future plans, Tshepe said that Chippa United, Bloemfontein Celtic and Cape Town City were some of the clubs who had already shown interest in his services.

The spokesperson for Black Leopards, Mr Berry Ramunenyiwa, could not be reached for comment as his phone went unanswered. Mirror will, however, publish the comments from the club as soon as we obtain them.