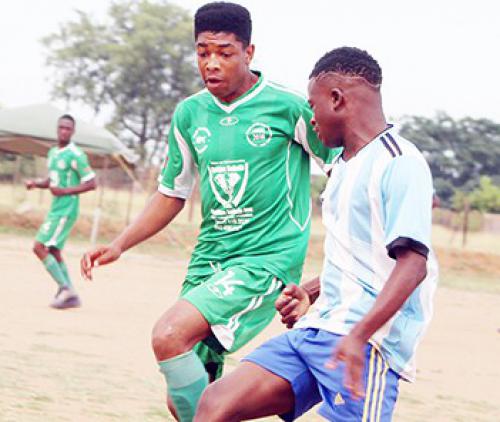 Matodzi Maedza of Birds with the ball, while Pfano Ndou is running to guard against any mistake.

Musiwa steers his team to victory

Musiwa Mutandari steered his team, Magau United, to victory when he scored a brace in the match during which United beat Makhitha Runga Birds 2-0 in the MMK Administrators League at Magau on Sunday.

What was evident from the start was that United were going to collect full points as the hosts were outclassed in all departments. Birds fumbled at the goal finish on a continuous basis. United took the match to Birds from the first whistle, forcing the opposition's defence to abandon their positions and pack themselves at the back.

The United keeper, Brutus, pulled off a brave save when Livhuwani Thonga forced his way through the defence of United before passing to Phathutshedzo Mbodi. His attempt missed the target by inches.

Musiwa Mutandari of United scored the first goal of the match in the 34th minute. He unleashed a powerful shot from outside the box that beat the keeper of Birds, Lavhelesani Netshisumbewa.

The second half saw Birds pressing hard in search of the equaliser. Ompha Mulaudzi of Birds dribbled past three defenders in a row but shot wide when left with only the keeper to beat.

Matodzi Maedza and Ntshavheni Liremi of Birds were cautioned with yellow cards for different infringements. Musiwa Mutandari completed his brace and scored his team’s second goal late in the match.