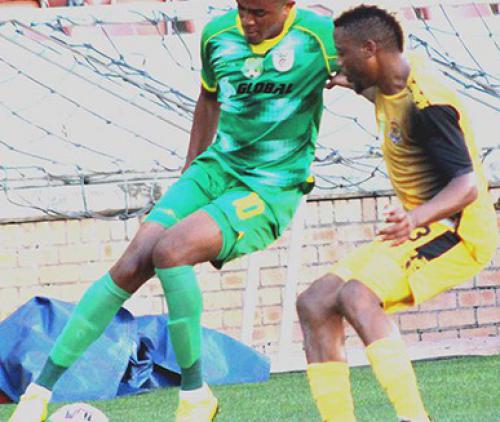 Gerald Phiri of Baroka hooks the ball, while Abel Zulu of Leopards keeps his eyes on it.

The caretaker coach of Black Leopards, Mr Allan Clark, is a frustrated man. Speaking to a contingent of journalists shortly after his team’s 0-1 loss to Baroka FC in their Nedbank Cup quarterfinal game at the Peter Mokaba Stadium last Saturday, the 40-year-old mentor could not hide his frustration. Saturday’s defeat was the fourth in a row for Leopards.

Lidoda Duvha lost 0-1 to Orlando Pirates, 1-2 to Polokwane City, 0-2 to Baroka FC in a league match before their defeat on Saturday. “It is now becoming stressful for me as the team’s coach as we lost all four matches out of our own doings,” he said.

“We are fast becoming our own enemy. According to my observations, we defended well. They got a penalty that we saved and gave ourselves a chance to stay in the game, but unfortunately we soon conceded an own goal,” he added. Clark further indicated that it was heart-breaking for him since they defended well and conceded silly goals.

He again stated that although mistakes were part of the game, his team seemed to be the hardest hit.

Clark’s counterpart from the Baroka camp, Mr Dylan Kerr, concurred with Clark, saying Leopards did not deserve to be fighting for survival at this stage as their performance was superb.

Baroka were awarded a controversial penalty in the 75th minute. The Leopards’ keeper, Rotshidzwa Muleka, braved the shot and palmed the ball away for a corner kick. A defender of Leopards, Josef Douhadji, kicked the ball back into his own net to clear, causing an own goal.

Goodman Mosele, Baroka’s midfielder, was nominated Man of the Match. He received a trophy and cheque of R5 000 after the game.