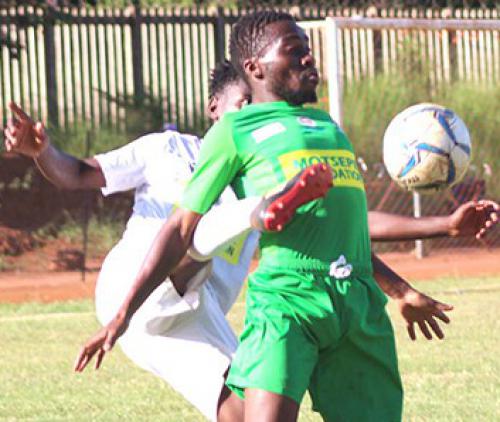 Siyabusa Ntshagase of Tigers controls the high ball, while Tsepo Chauke of VFA intercepts from behind.

In soccer, if you do not score, you do not win, no matter how entertaining the type of football you play. Venda Football Academy (VFA) learnt this the hard way last Sunday.

They played entertaining football, creating some scoring opportunities that they failed to convert and conceded one goal in their ABC Motsepe League game at the Tshifudi Stadium.

VFA went for the kill from the first whistle, with their midfielders distributing some telling passes to the frontrunners. VFA knocked on the visitors’ door for the first time seven minutes of the game. Modjadji Maoto, the Tigers’ keeper, was given a wakeup call with Rudzani Ndou’s close-range attempt. Ndou received a neat pass from Henley Mbedzi just outside the penalty box and tried his luck with a half volley.

Maoto made his presence felt by braving the shot and palmed the ball away for a corner kick. Tigers regrouped from behind shortly afterwards, forcing the home side to lose cohesion in the middle of the park. Eleven Tigers came close to scoring towards the end of the first half. Their left winger, Kgabo Mphela, went loose from the left corner and unleashed a ground cutter from the 25-meter area.

The ball missed the target by inches, much to the fans’ disappointment. The scoreboard was still blank when the referee, Mr Mpho Mphigalale, blew the half-time whistle.

The goal that earned Tigers full points came in the 68th minute. Pholooho Mamabolo was brought down within the box. That prompted the referee to award a penalty to the visitors. Katlego Motswane, the team’s captain, made no mistake from the white spot.

VFA were all over Tigers in the last 20 minutes of the game, but they could not find the equalizer.