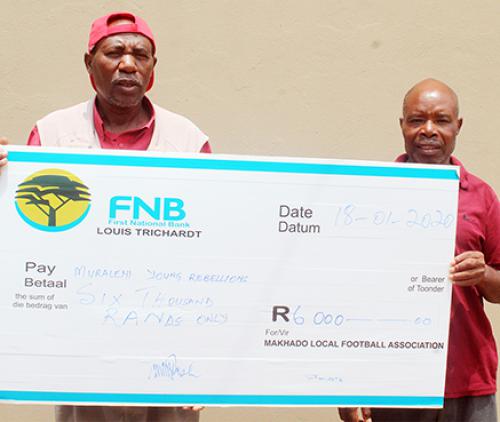 The teams playing under the banner of Makhado Local Football Association were rewarded on Saturday when they received their prize money during a ceremony at the local show grounds hall.

The guest speaker, Mr Moses Maluleke, a well- known soccer guru in the province and councillor at the Makhado Municipality, said young people must concentrate on their schoolwork and work harder during their training to achieve good things. He appealed to businesspeople to get involved in promoting sport.

He added that the local league had been operating many years without sponsorship. Maluleke discouraged young people from using drugs and alcohol when they are still young.

The secretary of the Makhado Local Football Association, Mr Freddy Phathela, sent a stern warning to all teams who failed to adhere to the rules that harsh punishment would be imposed on them. He praised the team managers and players for their dedication and commitment during their matches.

He said that the league would resume in the first week of February and appealed to the new teams who wanted to register in the league to pay affiliation fees before the kick-off.