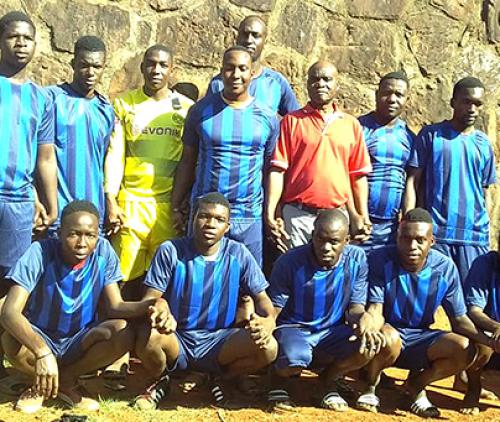 The traditional leader of Tshipako village, Chief Ndo Swika Nemavhola (standing third from left in the back) with some players of Tshipako Hot Spurs.

The chief was a soccer player in Mavhola village in the late 80s, playing for Goldville Young Tigers, and later he also played for Shayandima Bobs Stars. According to him, they used to play in tattered boots and jerseys in the past and he did not want his team to suffer as they had.

Tshipako Hot Spurs was recently promoted to the SAFA-Vhembe Stream B. Chief Nemavhola said that young people were the future leaders and they must be nurtured well through the promoting of sports. “We understand that when young people are kept busy, less crime is reported in the communities and some hidden talents can be revealed. We want to develop a sports centre, which will house various sporting codes,” said Chief Nemavhola.

According to Nemavhola, the aim of his donation was to remind the players that if they took their talent seriously, they might end playing for professional soccer teams such as Black Leopards. “Black Leopards was bought from Tshipako, meaning it originated from his village.  We want the soccer players of Tshipako Hot Spurs to emulate the good steps that Black Leopards have undertaken, now playing for the PSL,” added Chief Nemavhola.

The brand manager of Tshipako Hot Spurs, Mr Ntsandeni Mulibana, was over the moon to learn that the chief wanted to promote various sporting codes, which will go a long way to keep young people busy.