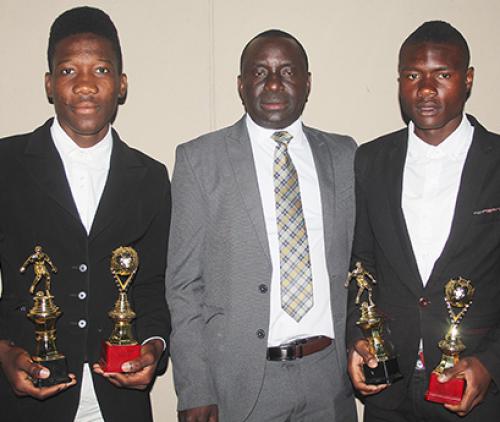 Two players who were awarded with trophies each for being players of the season and top goal scorer for Arsenal and Try Again, photographed with the guest speaker. From left to right are Lucky Buasi (Arsenal), Kaizer Marindi and Thato Senatla (Try Again).

Players of Madombidzha Try Again and Madombidzha Arsenal recently received their rewards for hard work during the past season.

Their awards ceremony was held at PNS lodge a fortnight ago. Try Again demonstrated the strength of their poison this year when they finished their league programme in the first position. They were also promoted to the Safa Vhembe MMK league. Arsenal finished in the fifth position.

The guest speaker, Mr Kaizer Marindi, managing director of Marindi Funerals, said soccer success did not necessarily start on the field. "Success goes hand in hand with planning. You must set achievable goals for yourselves and you will then reap success.”

The chairperson of Madombidzha Try Again, Mr Chester Malotsha, said the awards were meant to motivate players to work hard. "They deserve to be honoured in public, because what they have done makes everyone of us proud."