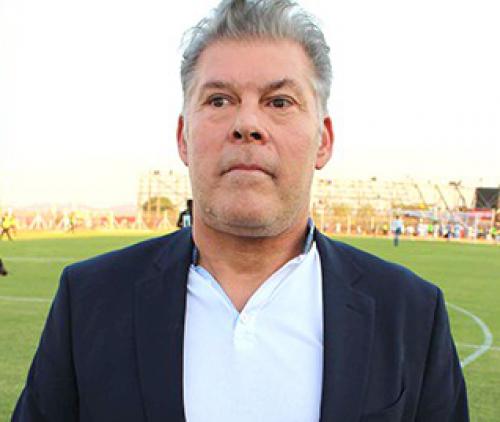 Black Leopards’ new head coach, Mr Luc Eymael, might only have been with the club for a week now, but he already knows the team’s weak and strong points. The Belgian mentor entered into a two-year contract with Lidoda duvha, following the dismissal of the entire technical staff - led by the former head coach, Mr Lionel Soccoia - two weeks ago.

Mr Eymael watched from the grandstand as his team beat Bloemfontein Celtic 1-0 at the Thohoyandou Stadium last Sunday, pending the issuing of his work permit. The permit was finally issued on Tuesday this week, making it possible for the 60-year-old coach to sit on the team’s technical bench for the first time in their game against Mamelodi Sundowns on Wednesday evening.

During an interview with Limpopo Mirror, Mr Eymael revealed that he had already observed during his short stay that the team had good quality players. He said that he found it difficult to understand why Black Leopards were not among the top four teams on the log at the moment, considering the depth of players they had in their showroom.

He was confident that he would soon be able to turn Leopards’ fortunes around. Leopards were lying in the 12th spot on the log before their match against Mamelodi Sundowns on Wednesday. “I am not a football angel, but what I have observed so far is that Black Leopards have the potential to compete for silverware,” he said.

He further stated that the only thing that would make him the happiest man on earth was to see Lidoda duvha lift a trophy before the end of his contract with them. Mr Eymael again stated that he would use the next two weeks to select the best combination. Black Leopards will be out of action for two weeks. Their next match will be against Supersport United at the Lucas Moripe Stadium on Friday, 25 October.