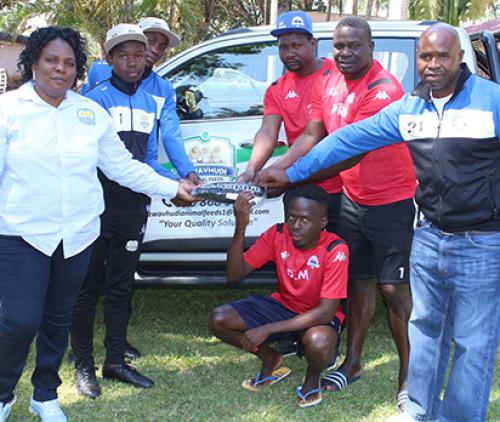 Mrs Joyce Thaba (fourth from right in the front row) poses for a photo with the players and officials of the team during the ceremony.

Tshakhuma RO Nandilani Football Club (TRON), an affiliate of the Limpopo Stream of the ABC Motsepe League, have good reason to rejoice. This follows the decision by the management of a local company, Zwavhudi Animal Feeds, to sponsor the team. A ceremony during which the sponsorship was officially launched was held at Levubu Park on Saturday morning.

Mrs Joyce Thaba, the company’s acting manager, handed over sports equipment, including tracksuits, soccer balls, training bibs and soccer boots, to the value of R35 000 to the team’s head coach, Mr Mashudu “Coolio” Ndou. When handing over the equipment, Mrs Thaba revealed that her company was known for giving.

She revealed that it was the company’s policy to plough a fraction of their profit back into the community. According to her, the company was founded in 2006 by its managing director, Mr TC Mahada. She stated that the company had donated goods worth close to half a million rand to various community-development projects, including churches, crèches and schools, over the past years.

She further stated that it was her company’s wish to see the team gain promotion to the higher division next season. According to her, the sponsorship will increase each year, depending on the financial position of the company.

When accepting the sponsorship, the team’s head coach, Mr Mashudu Ndou, said that it would go a long way in boosting the team’s morale. He praised the company for channelling a fraction of their profit towards the development of sport at grassroots level.