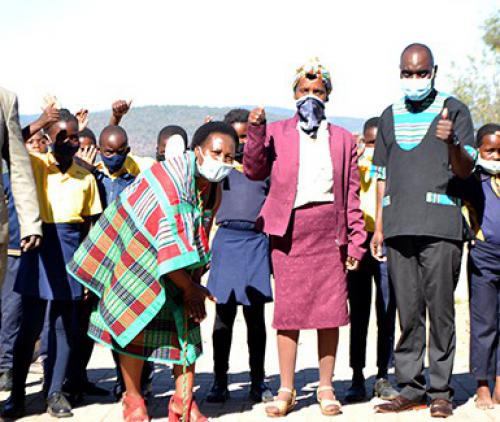 The star of the day - Ms Shonisani Eunice Ravhudzulo (centre) raises a thumbs-up. On the left is a fellow-educator at Ladzani Primary School, Mr Rudzani Nelufule, and the school’s principal, Ms Emely Phundulu (in traditional Tshivenda attire). To the right of Ravhudzulo is the chairperson of the SGB, Mr Erick Mutavhatsindi, and some of the school’s learners. Photo: Silas Nduvheni.

Ravhudzulo retires after 42 years of teaching

Ms Shonisani Eunice Ravhudzulo, one of Ladzani Primary School in Thengwe village’s most hardworking and dedicated educators, was showered with good wishes by fellow educators, learners, and guests during a proper farewell event held in her honour on Wednesday, 30 June.

Ravhudzulo (65) is retiring from teaching after 42 years. She was met by singing and ululation as she entered the hall and expressed her sincerest gratitude.

Ravhudzulo recalled that when she started her teaching career way back in 1979, she had known that she had received her calling from God. “As an educator, it is a great responsibility to raise a child from the first day they start school. But our salaries were small in those years. Life was hard when I started teaching, as many schools lacked classrooms and most of the learning and teaching were conducted under the trees, which presented some challenges. When it started to rain, we had to let the children go home, and when it grew too hot, snakes sometimes terrorized them,” she said.

Her career kicked off at Bashasha Primary in Mulodi village. She transferred to Ladzani Primary in 1988 and became an acting head of department for the intermediate phase in 2011. “I worked well with my educators, principal and learners to the very end.”

Ravhudzulo, who was also a Grade 4 teacher at Ladzani Primary, bought pens for all 49 of her students as another way of encouraging them to work hard at their schoolwork.

Ms Emely Phundulu, principal of Ladzani Primary School, said that bidding farewell to such a fine teacher as Ravhudzulo was sad, and that they would miss her contributions to the school’s upliftment. “She was one of the most hardworking educators I ever worked with. She always gave good advice on running the school and loved her learners,” Phundulu said.