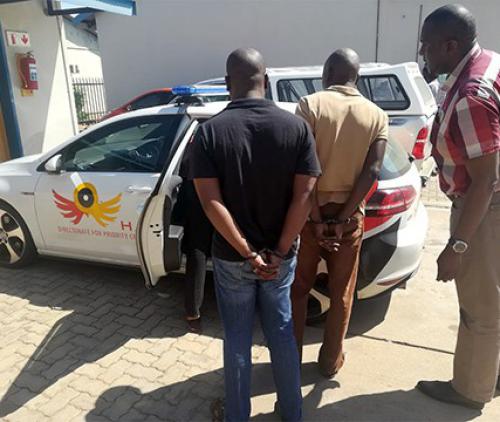 Sergeant Aggrey Mandule (37) and Constable Mokgabudi Benjamin Moseamedi (37) of the Morebeng SAPS pictured during their arrest by the Hawks. Photo: Limpopo Hawks.

The two police officers stationed at the Morebeng (Soekmekaar) SAPS who were arrested on Tuesday appeared in the Morebeng Magistrate Court on Wednesday on charges of fraud.

According to Hawks spokesperson Captain Matimba Maluleke, Mandule and Moseamedi (both attached to the police’s crime prevention unit) allegedly arrested the complainant on different occasions for reportedly operating the betting ring and issued him spot fines payable to them as admission-of-guilt fines. On each occasion, the police officers would issue the complainant with a receipt.

“The complainant alerted the Hawks’ Serious Corruption Crime Investigation team after he suspected that the money could have been lining the officers’ pockets instead of being registered at the station. The Hawks investigation revealed that the amounts that were recorded in the admission-of-guilt register between June and August 2019 did not correspond with the ones on the complainant’s receipts,” said Maluleke.

During their court appearance, Mandule and Moseamedi were granted R2 000 bail each and their case was postponed to 30 September for further investigation.