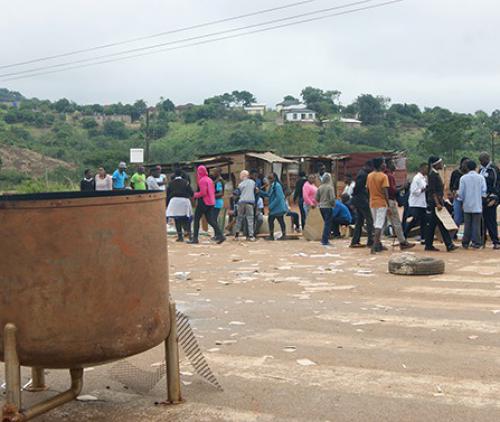 The Rivoni School for the Blind's pupils closed up the R578, demanding a new school.

Rivoni pupils close R578 in demand for a school

The pupils at Rivoni School for the Blind closed the R578 this morning. They claim that the Department of Education in Limpopo had failed to honour their promise of building a school for the pupils with special needs.

On May 2016, the department said they would renovate the old Lemana College at Magangeni village (just at the back of Rivoni), for the use by the pupils.

“They failed to keep their promise,” said a pupil, Nhlawulo Baburi. “Do these people know the kind of environment we are subjected to at Rivoni Society for the Blind's dilapidated buildings?”

According to the pupils, the department failed to address the school's concerns regarding shelter and educational facilities. Children are living in “outrageous conditions” – from stinking, dirty rooms, showers, classrooms to courtyards smelling of odorous sewage.

“We have no proper blankets and linens, just some rags with which we cover our bodies,” said a pupil. “This is truly demeaning; we sometimes do not feel like full humans – they are reducing us to pigs which stay and live in a pigsty.”

Department of Education’s spokesperson Sam Makondo said: "[We are] aware of the pupils’ protest and we are calling for calm in the school.”

He added that the building of a new school for pupils marked a big special project and the first of its kind in the province. No standard design is available, and the construction is different from the schools the department normally builds in the province.

“The designs have been finalised and the project will be going out on tender end of this month. We shall work around the clock to ensure that the contractor is appointed to take site. So, what we need here is patience, because surely the project is going to be implemented as planned.”