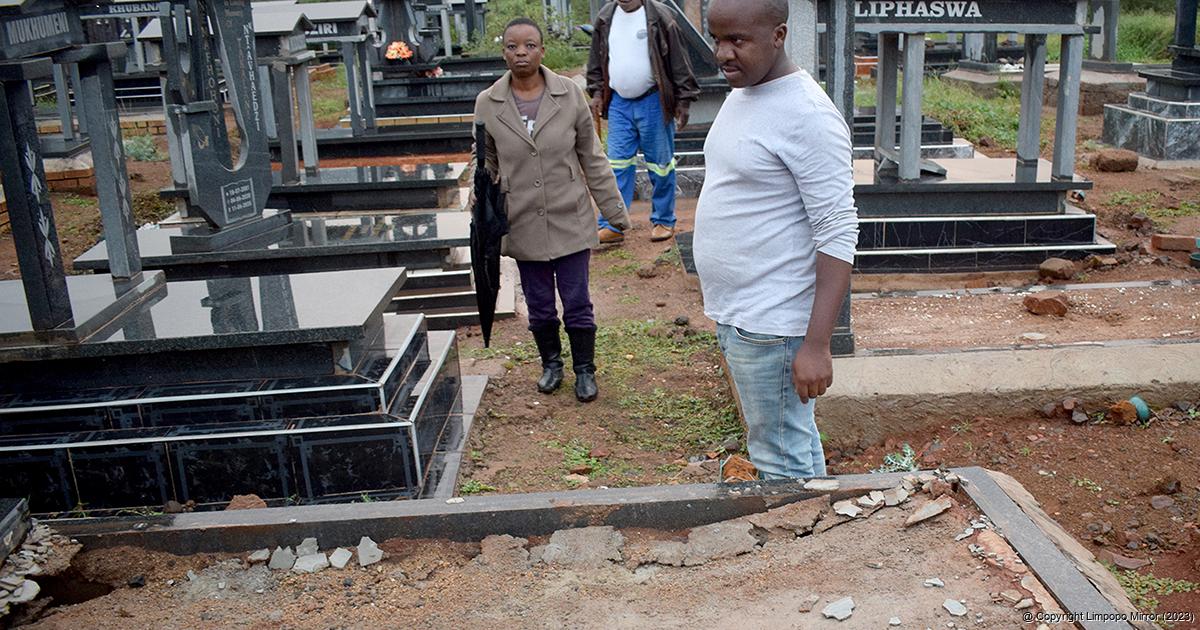 Midoroni residents at one of the vandalised tombstones. Photo: Kaizer Nengovhela.

This discovery was made by members of the community who visited the graveyard on 17 April. The theft and damage was reported at the Tshilwavhusiku Police Station.

The spokesperson for the Limpopo SAPS, Brig Motlafela Mojapelo, confirmed that thugs have been targeting tombstones at the graveyard lately. The motive behind the vandalism of the tombstones is still unknown, but a case of malicious damage to property has been opened. Mojapelo appealed to the community to assist the police with their investigation.

Ms Ndwamala Madzivhanani, whose mother’s tombstone was stolen and her daughter’s vandalised, said they had spent a lot of money on the tombstones. “We wanted our beloved to rest in peace. Now they have become abused. When we have problems, we come here to speak to our ancestors. To see the graves like this is painful,” she said. “We want the police to bring the culprits to book, because many people use their last cents to put tombstones up for their loved ones.”

Thovhele Vho-Vele Kutama said the community members were deeply disturbed by this. They are now working with different local structures to ensure that it does not happen again. Some of the concerned residents have resorted to guarding the graveyard at night. Kutama appealed to villagers to report any kind of crime or wrongdoings to the police.

According to Mr Sam Ntshauba, chairperson of the South African Funeral Practitioners Association, bogus undertakers and the people they hire to erect tombstones are behind the disappearing tombstones. He believes that they are involved in stealing and reselling tombstones and warned the culprits to refrain from these “barbaric” practices as the community will no longer trust undertakers.

“People spend so much money on tombstones, and these guys who put the tombstones up are stealing them to resell them again‚” he said. Ntshauba warned the community to watch out for cheap, unregistered labourers.