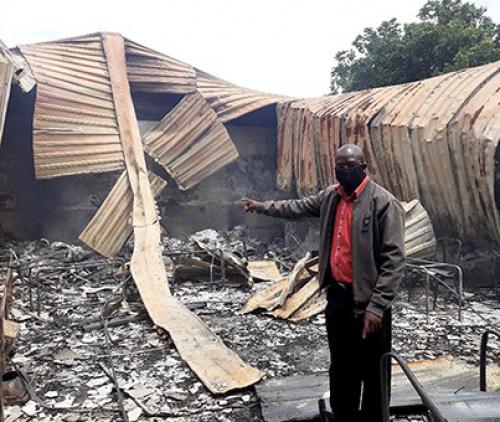 Explosion heard before school is destroyed by fire

The Tshikombani Primary School in the Nzhelele area was destroyed in a fire on Tuesday night.

According to the chairperson of the school governing body (SGB), Mr Azwinndini Nemaname the fire started at around 22:00 in the evening, during loadshedding. “We heard an explosion and after that the fire started inside the principal’s office and engulfed the entire admin block. The fire consumed all the furniture, refrigerators, photocopy machines, microwave, steel cabinet, two televisions, a laptop, a bed for the sickbay, all the files that were kept since 1977 and more than ten computers,” he said.

“We called the police and emergency officers to extinguish the fire. We lost everything and our kids are going to write exams on Monday next week. How are we going to print exam papers? Still, the education of our kids must go on,” he said.

Nemaname said that they have had to send learners back home the next day so that police could finish their forensic investigations. “The estimated damage is over a million rand. This is one of the poor rural schools in the Nzhelele area and we have 452 learners, 13 educators and 15 classrooms. Five of the classrooms were built by the struggling community of Tshikombani,” he said. “We are calling on anyone who might have seen anything, or know about the fire, to give information to the police. As parents, we must promote the culture of learning.”

Vha Musanda Vho-Ntshumeleni Lusunzi of Tshikombani village said that it is the first incident of this nature since the school started in 1977. “We are pleading with the local businesspeople to help by donating photocopy machines, so that the kids can write their exams next Monday,” he said.

The spokesperson for the Limpopo Department of Education, Ms Tidimalo Chuene, said they have received the disturbing news about the fire at the school and trust that the police’s investigations will reveal what had happened.

Limpopo police spokesperson Brigadier Motlafela Mojapelo said that they have opened an inquest docket and investigations are underway to determine the cause of the fire. “It is still premature to point a finger and the community must help the police by giving information,” he said.