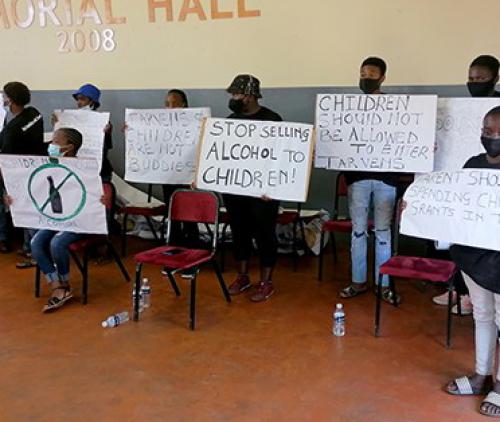 Learners voiced their concerns regarding taverns around Waterval on Saturday, 23 October, at the Elim Hlanganani Society For The Care Of The Aged's hall. Photo: Bernard Chiguvare.

Taverns must stop making so much noise, beg learners

This is the time of the year when learners put extra efforts into their studies in order to pass the final exams for the year with good grades. However, for some, this effort seems hopeless as they live in areas where the noise coming from taverns makes concentrating on their studies impossible.

On Saturday, 23 October, more than 30 learners from around Waterval attended a child-led campaign against the effects of local taverns. The event was hosted by the Elim Hlanganani Society For The Care Of The Aged, stationed in Waterval, in partnership with Save The Child organisation. Police, traditional leaders, councillors, tavern owners, as well as learners and parents around Waterval attended the campaign.

“Loud taverns distract learners from studying every day. We teach learners how to demand their rights by engaging with stakeholders, like the police, councillors and tavern owners,” said Molly Ameker, Director of Elim Hlanganani Society For The Care Of The Aged.

Limpopo Mirror spoke to some of the learners and stakeholders. “Yes, taverns should reduce the noise that comes from them. We need time for studying every day, but just when we sit down with our books, the noise picks up. I really need at least four hours of study a day, but I cannot do that because of the noise,” said an 11th grader, who aims for a degree after passing Grade 12 next year. The learner said that parents too should have respect for their children’s study time, as some of them make a lot of noise when they return home from taverns late at night.

Mukhetwe Mutavhatsindi (Grade 10) agreed that this is a serious challenge for learners who live close to taverns.

Some of the tavern owners who attended the meeting said they were not always responsible for the noise. Maxwell Mulaudzi said that he operated within the set time and when he closed his tavern, his customers went home. “During my operating hours there is limited noise. Most of the time the noise starts after they have left the tavern. Imbibers often make noise playing music outside their homes.” Mulaudzi has been running his tavern for almost eight months now.

Ward 16 councillor Ntsako Joyce Simangwe and Jabulani Kumalo from the Mpheni Makhakhe Tribal Council believe such platforms are necessary in communities. “We really understand the plight of the learners. As traditional authority, we cannot resolve this alone. I believe such engagements are key to establishing common ground,” said Kumalo.

As a way forward, Mashandi Mokane from Save The Children said the country had laws relating to liquor and these laws should be enforced. “We need to look at legislation. There are laws that say children should not be in taverns, but we still see them in taverns. This means that there is a lack of monitoring, either from the government or the community,” said Mokane, adding that more such campaigns should be started to raise children’s voices.