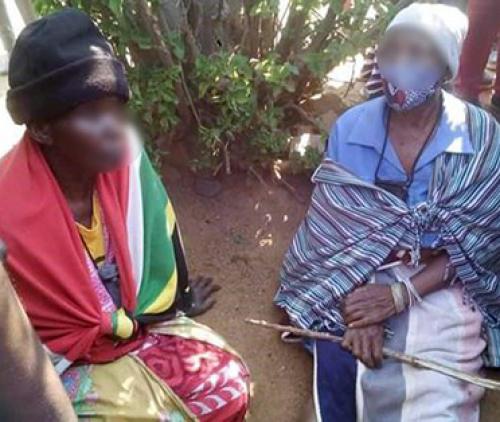 Two old women became the talk of the town when they were accused of performing witchcraft in Madombidzha village last week. Photo from social media.

An incident involving two old women who were rescued from an angry mob at Madombidzha Zone 2 last week after villagers started accusing them of witchcraft, has become the talk of not only the whole Vhembe area, but seemingly the whole of Limpopo.

At around 03:30 on the morning of 15 October, while most of the villagers at Madombidzha were still fast asleep, the two women, both in their 80s, were spotted outside. Neither of them is a resident of the village.

What seemed to have raised the villagers’ suspicion was the fact that the gogos were seen near someone’s house with, what upon inspection appeared to have been muti, soap, a piece of wood and a mirror. Adding to their mysterious presence was the fact that one of the women is said to be a traditional healer from Nzhelele, many kilometres from Madombidzha. Where the other woman is from is not clear, but the women are said to be cousins.

At around dawn, however, a local resident crossed their path and asked them their business. Apparently, they told him that they were lost and could not find their way back home. The resident alerted others and soon the two women were confronted by a whole mob, who accused them of witchcraft.

An eyewitness who arrived at this scene said that they were surprised to find the two grannies at that hour of the morning. “On questioning them about why they were there, they could not give a convincing answer. First, they told us that they arrived by the 03:00 am bus. But, of course, we know there is no such bus in the area, as buses only start operating from 05:00. Then they claimed that they were performing rituals at a local household and got lost after assisting their client.” But the villagers were still not convinced by these explanations and were getting fed-up with them. “We were really shocked to find suspicious items in their possession, including muti,” the witness said.

The daughter of one of the old women spoke to Mpho Rathando on Phalaphala FM’s talk show on Monday, 18 October. According to her, her mother suffers from memory loss. She said her mother and her mother’s cousin decided to visit her (the daughter’s) brother, who lives within walking distance from her mother’s house, late last Thursday afternoon. Somehow, she said, they must have taken a wrong turn and got lost.

“On Friday morning, after dropping my kids off at school in Louis Trichardt town, someone I know told me that my mother had fallen, so I rushed to Madombidzha village.” She said that, when she arrived at Madombidzha, she saw her mother lying down on the ground. “When I got to her, I tried to pick her up, but she told me she had been beaten with a stone and a bottle.”

The two old women got in the car with the daughter, but villagers surrounded the car, refusing to let them leave. Only the timely arrival of the son of one of the old women, who was accompanied by the police, saved them. “Otherwise, we might have had a very nasty situation on our hands,” a witness said.

The daughter said her mother had never been accused of witchcraft before. “In our culture, witches are known to be naked, but my mother was fully dressed. She even had a mask on.” She advised the people of Madombidzha to “go to school and get educated”.

“Learn to have respect for your elders,” she said. “The Bible says, ‘honour thy father and thy mother, that it may be well with thee’,” she added. She also asked those who had done the two elderly women wrong to come forward and apologise.

Dr Matamba Mamuremi, president of the Vhangona Indigenous Health Practitioners organisation, said certain rituals were often performed at those odd hours. “There is not necessarily anything sinister about their being there at that time. They might have lost their way or got tired after performing rituals,” he said. “But at the same time, there are also evil people who go out to bewitch others, which is not in line with our calling as traditional healers,” he said.

The Tshilwavhusiku police confirmed that they had received a report about two elderly women at Madombidzha and rushed to the scene, where they rescued them from the mob. They said no charges had been laid by either of the two women.

A hot debate around the incident has since taken root, especially on Facebook, with some believing that the woman were busy with some kind of witchcraft, while others say that old age could have been the reason for their getting lost after performing rituals at a client’s home.