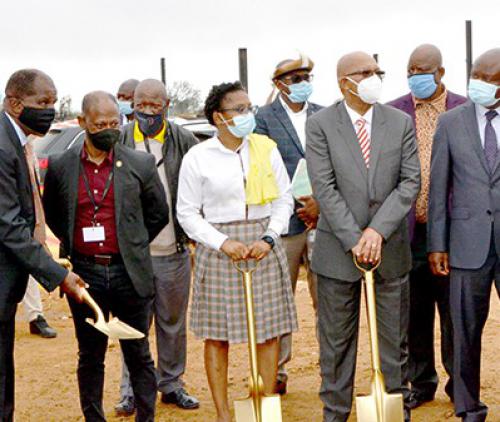 Standing from left to right in front: The founder and executive chairman of the Masingita Group of Companies, Dr Mike Nkuna (holding spade), Eddy Lekganyane, Minister of Communication and Digital Technology Khumbudzo Ntshavheni, Limpopo Premier Chupu Mathabatha and the executive mayor of the VDM, Cllr Dowelani Nenguda, during the sod-turning ceremony held to mark the beginning of the Nkuna City project. Photo: Silas Nduvheni.

A sod-turning ceremony was held to mark the beginning of the R1,5 billion Nkuna City project at Nkuzana village near Ha-Masia on Thursday, 7 October.

Limpopo Premier Chupu Mathabatha described Nkuna City as a game-changing catalyst project that would promote and support radical socio-economic transformation, modernisation and industrialisation of the rural economy. The investment is expected to offer massive job-creation opportunities with, among others, industries, shopping centres, intermodal facilities and hotel and conference centres.

The ceremony was attended by, among others, the Minister of Communication and Digital Technology, Ms Khumbudzo Ntshavheni, the Deputy Minister of Small Business Development, Ms Gina Nomalungelo, the MEC for Economic Development, Environment and Tourism, Thabo Mokone, and the executive mayor of Vhembe District Municipality (VDM), Cllr Dowelani Nenguda.

Dr Mike Nkuna, the founder and executive chairman of the Masingita Group of Companies, applauded the support from the Limpopo provincial government and said that this was proof of the government’s commitment to working with investors to improve the socio-economic conditions of the people, especially in the rural areas. Development of the first phase of Nkuna City had already commenced on 14 April this year and is expected to be completed by April 2022.

Nenguda urged communities around the Nkuzana and Ha-Masia area to protect the project jealously from vandalism, so that future generations will also be able to make use of the facility.