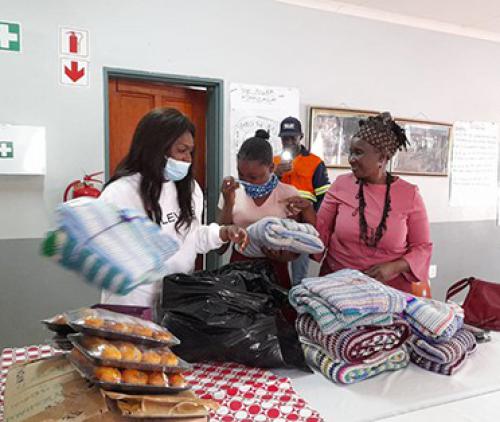 Ornica Netshiozwi (in maroon dress) donated blankets and some food to children housed at a shelter in Musina on Saturday, 21August 2021. Photo supplied.

Netshiozwi's dream is to help the young in street shelters

“We sometimes discriminate against or ignore children who roam the streets unaccompanied by a parent or guardian in search of food or clothes. Take some time to consider what really caused these children to leave their homes,” said Musina resident Ornica Netshiozwi.

Netshiozwi is on a mission to extend a helping hand to some 18 minors, housed at a shelter in Musina. She makes blankets from wool. “It is wintertime, and I would like to make their nights enjoyable by donating a woollen blanket to each of these children,” said Netshiozwi.

The blankets she makes are actually for sale, but she felt that making a contribution to the lives of these poor orphans in Musina was something worthwhile.

Netshiozwi’s dream coincided well with Child Protection Week (CPW), launched by the Minister of Social Development, Ms Lindiwe Zulu, on 30 May this year.

CPW forms part of the government’s efforts to raise awareness and mobilise communities to protect children from abuse, neglect, exploitation, ill-treatment and other forms of violence.

Netshiozwi started to buy wool out of her own pocket, but soon realised that the cost was more than she could afford. That was when she decided to go around to raise the funds needed for her project. Although she, with the help of other volunteers, managed to make the blankets by June, they were prevented from making the donation because of the lockdown restrictions.

On Saturday, 21 August, she finally got an opportunity to hand the blankets over to the initial 18 vulnerable people at the shelter, with an additional child among them.

“I never thought I would ever come across three- and six-year-olds living in a shelter. I have more questions than answers. How did they end up in South Africa? Who brought them here? What were they feeding on all along on their way to South Africa?” the mother in Netshiozwi kept asking herself, and vowed to include these little ones in her monthly budget. “I really feel I have to do this; some of them wore torn dresses. It just breaks my heart!” she said with tears in her eyes.

Jacob Matakanye, one of the board members of the Nancefield and Matswale shelters, conveyed his appreciation for this generous donation. “We laid the foundation (by establishing a shelter for the homeless) for these vulnerable people and appreciate any donations that will assist us in looking after the children,” he said.