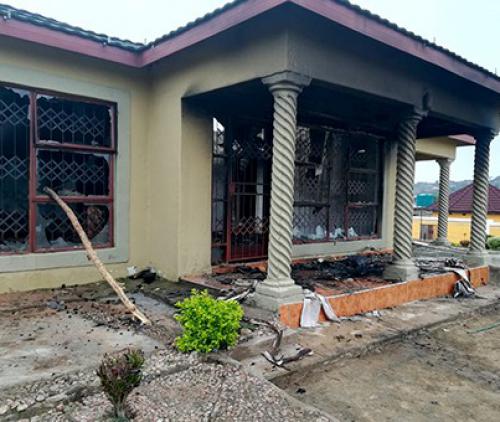 The house in which a couple were burnt beyond recognition. Photo supplied.

Couple burn to death after gunshots are heard

Another case of what appears to have been domestic-violence related turned to tragedy when a couple burnt to death at a house in N’waxinyamani Village on Friday, 20 August.

According to reports received, the deceased woman, identified as Thokho Rikhotso (41) was at her parents’ house when her boyfriend, known as Emmanuel, showed up too. The two were allegedly seen entering the house. Minutes later, neighbours heard gunshots and screams, and smoke was seen coming out of the house. Members of the community rushed to help put out the flames, but the fire was already too strong. The couple burned beyond recognition.

The provincial police spokesperson, Brig Motlafela Mojapelo, said that a case of murder had been opened, but the motive remained unknown. A post-mortem will be conducted to determine the cause of the victims’ deaths.

Limpopo MEC for Social Development Nkakareng Rakgoale has condemned the incidents related to gender-based violence and femicide in the Vhembe District.

In one single week, a policeman shot and killed his wife before turning his gun on himself at Vyeboom, while another couple were burnt beyond recognition in a house after it was allegedly set alight by the woman’s boyfriend. In Tshidzini, a 99-year-old woman was allegedly stabbed to death by her nephew and another woman was killed by her husband at Tshiendeulu.

“It is disheartening to still see all these incidents of gender-based violence and femicide – and that during Women’s Month. The department has family-preservation programmes aimed at building strong family units. We call on our communities not to resort to violence when faced with challenges in their relationships and family units, but to make use of these programmes instead,” Rakgoale said.