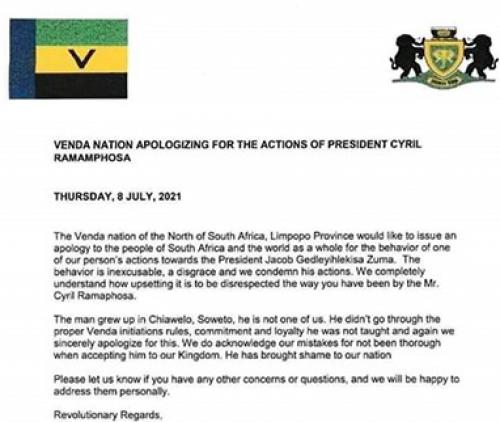 The fake press release that is being circulated on social media.

Royal family distances itself from tribalist attack on Pres Ramaphosa

The Ramabulana royal family has distanced itself from an “apology” doing the rounds on social media where the “Venda Empire and its People” attack President Cyril Ramaphosa and show support for former president Jacob Zuma.

In a statement released on Friday morning, the spokesperson for the Vhavenda Kingdom, Thovhele MJ Masia, condemned the use of its identity to hurl insults at President Ramaphosa.

On Thursday, a document written by an unnamed “Secretary General” of the “Venda Empire and its people” was circulated on social media platforms. “The Venda nation … would like to issue an apology to the people of South Africa and the world as a whole for the behavior of one of our person's actions towards the President Jacob Gedleyihlekisa Zuma,” the statement reads. The statement is printed on a letterhead depicting the old Venda flag as well as the royal emblem of the Vhavenda.

The letter then continues to attack Ramaphosa, saying that he brought shame to the Vhavenda nation. “The man grew up in Chiawelo, Soweto, he is not one of us. He didn’t go through the proper Venda initiation rules, commitment and loyalty he was not taught and again we sincerely apologize for this,” the letter states.

Thovhele Masia, in his response, described the unidentified authors of the document as “certainly frustrated people”. He said the motives behind the letter were clearly evil. “The writers of the statement have either not been properly brought up in our culture of respect or are in the kindergarten stage of politics and still think that they can advance their narrow political agendas by playing tribal cards,” he said.

Masia added that “it is quite clear that these individuals undermine our people’s intelligence. The hurling of insults to the President of the country, Mr Matamela Ramaphosa, using our identity is condemned.” He said that the Vhavenda nation, under the leadership of Khosikhulu Toni Mphephu Ramabulana, held the President of the country in high esteem “and will forever be proud to be associated with him”.