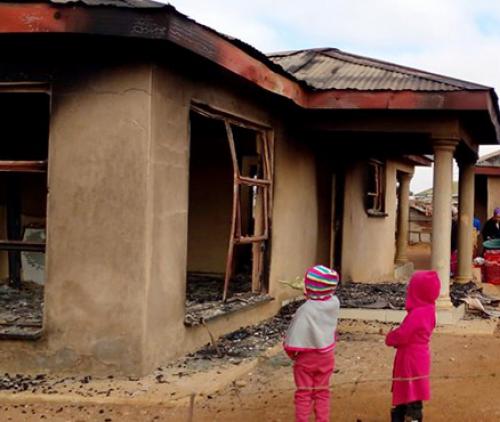 Community members of Ravele help the Selota family after their house and vehicle were set alight by an angry mob earlier this month. Photos supplied.

Fifteen arrested for taking law into their own hands

Fifteen community members from Ravele were arrested on 10 June and appeared in the Tshilwavhusiku Magistrate’s Court on 17 June on charges of arson, public violence, theft, and malicious damage to property. Their arrests follow an incident earlier this month where five families’ houses were burnt down.

On 10 June, Limpopo Mirror reported on Mushaathama Matshili (41), who was found raped and killed and her body dumped in the bushes between Ravele and Madabani villages on 6 June. A suspect, Lerato Thato Motsoko (27), was arrested shortly after and charged with murder.

Angry residents from Ravele went on the rampage after hearing that Motsoko had been connected with the rape and murder of Matshili. They believed him to be part of a gang of criminals in the village who had been causing the community sleepless nights. A mob then burnt down the houses of the parents of five people whom they suspected to be involved in these criminal activities in the village, including Motsoko’s.

“It was a painful sight to watch helplessly as all my efforts over so many years were destroyed. I just thank God that no one was in the house when they set it on fire,” said Mr Shadrack Selota, one of the victims and father of one of the “criminal gang members”.

Selota’s eight-room house was burnt to ashes on 8 June. “The house took me 10 years to build. I was a proud father who knew that his family had a place to call home. Now that the house has been reduced to ashes, I have nothing to show. But I’m thankful that all my family members are alive.”

Five beds, three wardrobes, two fridges, a car, all their clothes, food, blankets, identity documents, certificates and many other personal items were destroyed. They were left with only the clothes they were wearing and still do not know where their next meal will come from. “We are now sleeping at relatives and don’t know what our next step is from here,” Selota said despairingly. The damage to his property is estimated to be R600 000 or more.

“We beg the community for donations; anything from food, clothing and building material to furniture and household utensils,” he said. Community members who would like to help the Selota family can call him at 072 294 2984.

Mr Johannes Masia and his family had to escape the aggressive mob through a window. He said they had arrived at his home at around 22:30 and demanded to know his son’s whereabouts, before they had set his six-room house alight. “But my son had been arrested a long time ago. I don’t know why they burnt my house, because I’m not responsible for any crime,” said Masia.

During the attack furniture, groceries, blankets, and clothing, valued at almost R300 000, went up in flames with the rest of the house, leaving the family homeless and hungry. Masia injured his right leg while trying to escape their attackers. They stay with relatives for now.

The Masia-family also need the goodwill of the community to help them fix up their house again. Masia can be reached on 071 552 7435.

The case of the 15 accused was postponed to 23 June for a bail application.