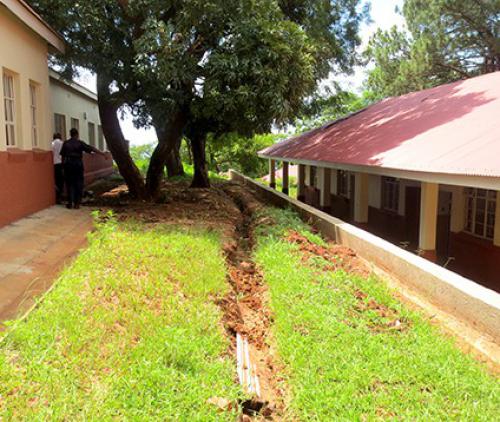 Some of the new classrooms constructed at Lemana College. Photo: Bernard Chiguvare.

Following several years of problems and uncertainty, the Limpopo Department of Basic Education now reckons that Lemana College will soon be successfully converted into a high school. The project has been mired in controversy and disruptions and the cost has run into tens of millions of rands.

Lemana College has a rich history dating back to the 19th century. Missionaries arrived in the area in 1870 and bought a farm around Elim where they started a school with seven children. The school was named Lemana. As the school continued to grow, a teacher’s training college was established in 1906. Around the 1990s, the college and the high school were sharing the same premises, but as demand for teachers increased in the country, the high school was forced to relocate to prefabricated classrooms, a couple of kilometres away from the college.

Around 2008, a meeting was held between a group called Historic School Projects and stakeholders. The interested parties voted in favour of moving the high school back to Lemana College.

According to the Limpopo Department of Basic Education, the contract for the construction of Lemana High School was awarded to Bankuna Engineering and Construction through a competitive bidding process for an amount of R36,58 million. The site handover took place on August 15, 2013. The contract was, however, terminated on May 3, 2017, allegedly because of poor performance by the contractor. At the time of termination, the contractor had undertaken construction work worth R14,78 million.

On June 12, 2018, a replacement contractor, Lilithalethu Trading 41, was appointed to complete the construction project. The project was, however, continuously disrupted by community members, who ultimately closed the site in September 2019, demanding that local labourers and sub-contractors who had worked for Bankuna Engineering and Construction be paid. According to the department, Lilithalethu Trading was the victim of events that had nothing to do with this business, as the monies were owed by the previous contractor.

To ensure construction continued without disruptions, a stakeholders meeting was held on 17 May this year at the Njhakanjhaka Traditional Council. The meeting resolved that the contractor could return to the site and the community needed to write a letter confirming that the work on site would not be interrupted. The issue of unpaid sub-contractors and local labourers will be taken up by the relevant department for legal guidance and possible action. If or when the contractor returns to the site, students must move out of the buildings because of safety and security concerns. The circuit manager working with the SGB and community will explore alternative accommodation during construction.

Outlining the scope of the work at Lemana, the department said this included the building of 15 classrooms, three toilet blocks, an administration block, two nutrition centres, a gathering hall, the renovation of existing facilities and the upgrading of the road and parking area.