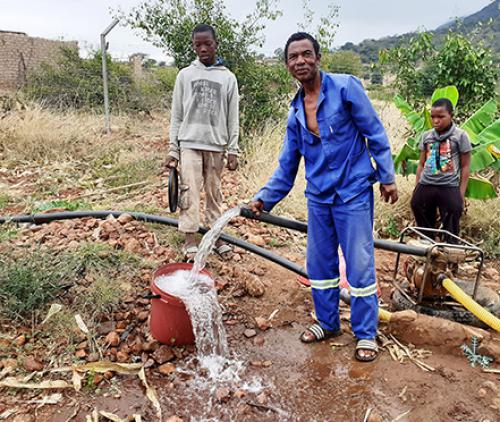 Mr Phineas Madaela (61) says they have water galore in his borehole which can supply water for all households in his small village. Picture: Tshifhiwa Mukwevho

In 2016, Mr Phineas Madaela (61) sat down for days while searching his mind for a solution to the problem of the lack of water in Mammburu village at Tshituni. After eight months of pondering, he decided to dig a well in his yard, using a pick and shovel.

Great was his surprise and excitement when he discovered water aplenty at seven metres deep. He dug even further, using a hammer and chisel. On the 15th day of digging, he reached a depth that satisfied him - nine metres deep.

He was so excited that he made a public announcement that water was available free of charge for the entire dry, rocky village. They used a bucket-and-rope system to draw water from the hole. However, after some time, Madaela made a makeshift hand-lever system to pump the water.

Limpopo Mirror visited Madaela and published his story in January 2017, following readers’ wonder and amazement over this finding. The Economic Freedom Fighters (EFF) even vouched to help by adding another borehole and supply tanks at the central point. Some ten residents were employed to lay a pipeline from Madaela’s borehole in his yard up to a central point, where tanks would be stationed.

“The EFF’s promises were never honoured. They were only using my name and the project as a donkey cart to garner popularity through the media,” Madaela said. “Their project went no further than the useless trench they dug and left uncovered. Even today I am still angry at people like them who do not respect the poor people in the rural areas. That’s un-African.”

Madaela’s intention of digging for water was mainly a means to try and find a solution to the problem of the lack of water. He had been appealing to good Samaritans to help with the supply of an electrical water pump, to no avail.

“Many people called me and made empty promises,” he said. “Along the way, I managed to get a second-hand water pump, but it needs fuel. So, if I buy fuel from my own pocket, it becomes hard for me to share the water with other people here in the village because I cannot afford to buy fuel, since I am unemployed. Despite empty promises and disappointments, we have water galore.”

People called him from Gauteng around February last year and told him to go to the nearest hardware store to request a quotation for a full water station, which included a water pump kit, pipes, some tanks, and related necessities that would have helped him set up a central water station in his village.

“Sadly, lockdown was announced, and because of that I had not heard from those people again,” he said with some disappointment. “Somehow I didn’t save their numbers correctly, so I cannot contact them.”

Mammburu relies on water that flows from a well in the mountains into tanks, which are placed in a central space. During late winter, the well runs dry and the village is totally without water. Then they are forced buy water from the nearest villages or from a handful of those who had drilled boreholes at their stands, until the rainy season comes.

“It’s a real struggle every year,” Madaela said. “But if those who had promised to help had really lived up to their promises, we would have been pumping the water from my yard straight into the tanks when the well starts to run dry.”