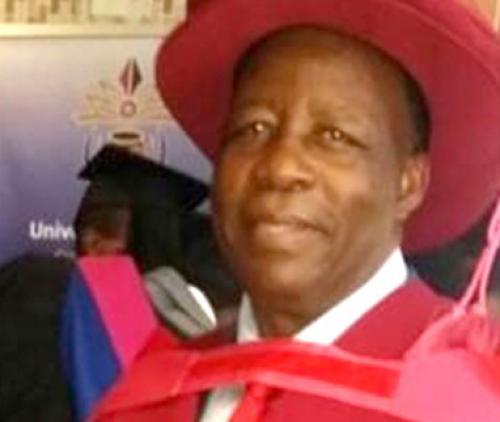 Struggle icon “Dr H” will remain part of our vision

When public schools reopened for the new year on Monday, black and white children went through the gates of Soutpansberg Primary without anyone even noticing.

On the same day, a convoy of cars drove into the Makhado (Louis Trichardt) cemetery near the industrial area, carrying the body of Happy Ramakhanya as people went about their duties. If anyone complained, it would have been because traffic cops were stopping traffic to allow the cortege to pass unhindered.

This new normal - of children of all races going to the same school or burial in the same cemetery - just like the wearing of masks and being sprayed with sanitisers at various public and private places, was not always normal. A struggle had to be waged in the early 90s for the integration of the former Model C schools.

Equally, in line with the apartheid policy that not only separated the living but even the dead, a struggle had to be waged to ensure black people who resided in the town should be buried where they chose, including the local cemetery.

Dr Takalani Happy Ramakhanya was an integral part of that struggle, which at some point included calling for a boycott of the town to force change. Ramakhanya died at a hospital in Polokwane last Thursday after being ill for some time.

And so, on Monday, as he was laid to rest at the Makhado cemetery, it was as if fulfilling the Venda saying Khokhonya ila maanda a yo. The closest English translation would be that you earn what you worked for.

And that he was laid to rest as schools reopened to grapple with the new normal of the Covid-19 virus mutating into an even deadlier one, making schooling treacherous, was also significant because Ramakhanya was an educationist who spent his entire working life imparting knowledge or managing others to ensure they did it well.

Born in Nzhelele, he started his schooling at Vuvha, with his high school education at Mphephu High. He obtained his teaching diploma at the then University of the North (Limpopo) and went on to do his honours and masters at Rhodes and Unisa respectively. He obtained his PhD in Curriculum Development Studies at the University of Venda in 2011. His thesis was on “The Continuous Assessment for Effective Teaching and Learning at Vhembe District in Limpopo Province”.

Ramakhanya worked as a high school teacher and principal of a high school, before becoming the Vice-Rector of the Tshisimani College of Education, and later its Rector. He went into education management as a circuit inspector and later as Manager of the Makhado Continuing Professional Development Centre at Biaba, which helped teachers cope with new teaching assessment methods for accounting, business studies and economics. He retired in 2016.

A man of good tastes, humour and given to hyperbole, Ramakhanya insisted after getting his PhD on being called Dr H. Even his own voicemail referred to himself as Dr H. This playful side of Ramakhanya belied the strong will for fairness and justice. It was this need to see justice that saw him getting involved firstly in the then Transvaal United Teachers Association (Tuata) but when the political militancy of the late 80 was sweeping through the country, Ramakhanya was at the forefront of the struggle for militant teacher organisations, starting with the formation of the Far Northern Transvaal Teachers Congress (Farnotracto), the forerunner to the SA Democratic Teachers Union, which was affiliated to the United Democratic Front.

Ramakhanya chaired the Joint Community Forum for Mphephu Lutanandwa Land Claims, through which he fought hard for the return of the Entabeni farms. It is a struggle he died still waging. A member of the ANC and SACP, he was outspoken about whatever he believed to be true. He was a great supporter of Jacob Zuma going towards the Polokwane conference where Zuma was elected. But when the corruption under Zuma’s leadership came to the fore, he was among the first to admit that electing Zuma was a mistake. “Hey, we elected a mad man”, he once confessed to me.

Ramakhanya and his wife, Nyamuofhe Mavhungu Lerule Ramakhanya, who is now the MEC for Public Safety and Transport in Limpopo and a former mayor of Makhado, were considered a “Power Couple” in Makhado as they were both senior activists and leaders within the ANC and SACP.

His memorial service on Sunday, and the funeral service on Monday, at the House of Grace Church in Makhado, pulled in political heavy weights from both the ANC and SACP and from government. In a beautiful setting full of flowers and gospel music, all those present who knew Ramakhanya knew it was a fitting and typical Ramakhanya ceremony and send off, with only his talkative self missing. He leaves behind eight children and seven grandchildren.

Writer, poet, and former journalist Ike Moroe, writing in October last year after the death of one freedom fighter, wrote:

There are those
We deeply wish
Should not have died.

They remain
Part of our reality.
They are part of our vision,

And their being
With all its depth
And honour,
Is etched deep in our memory.

Ramakhanya was one such person.