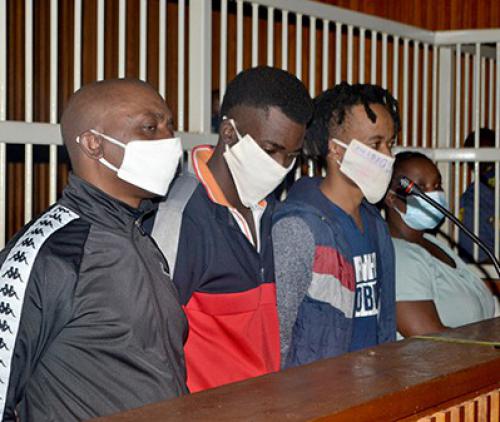 Four in court for “Valentine murder”

What was supposed to be a special Valentine’s Day celebration for a couple from the Makwarela Extension outside Thohoyandou on 14 February 2019, ended in tragedy when the man was shot dead.

The victim, Azwifaneli Mudau, was a well-known businessman who owned an electrical company called Rialivhuwa Electrical Engineering in the Thohoyandou CBD.

According to the spokesperson for the Director of Public Prosecution (DPP) in Limpopo, Mashudu Malabi-Dzhangi, Ntanganedzeni Winnie Nemaranzhe (34) had asked her husband, Azwifaneli, to go buy them two loaves of bread and bring back pocket money for his kids. Just as he drove through the gate at home, he was shot by unknown suspects, who fled the scene with his vehicle. The Nissan 1400 was later recovered abandoned next to the Mbaleni graveyard.

Four suspects were arrested in connection with the murder and a case of conspiracy to commit murder was opened against Nemaranzhe, Tshivhangwaho Mudau (46), Tshililo Madega (31) and Takalani Nemutandani (33). Charges of robbery with aggravating circumstances were added.

Malabi-Dzhangi said that one of the accused, Tshivhangwaho Mudau, was arrested for robbery in the Vuwani area in December of 2020. He allegedly admitted that he was the one who had killed Azwifaneli Mudau, with the help of his friends Madega, Nemutandani, and Mashudu Lucky Gibisela. Gibisela was later killed, allegedly as per instruction from Nemaranzhe, because he was demanding more money after she had transferred R30 000 to Nemutandani for killing Mudau. Gibisela was killed in the Levubu area, along the R524 road, next to Matopo Lake Gardens near Ha-Mutsha village.

On Tuesday, 26 January, the Thohoyandou Magistrate’s Court postponed the case until 2 February when formal bail applications will be heard. All four suspects remain in custody.