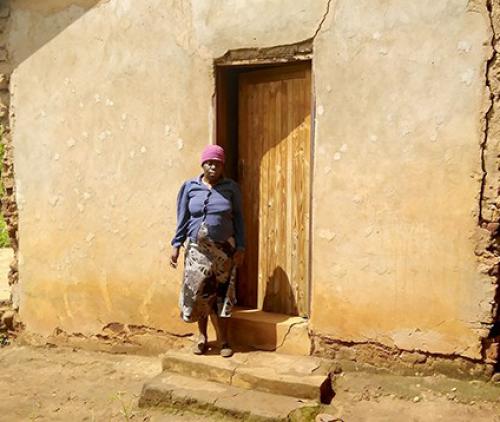 ‘Why can I not also get an RDP house?’

“I do not know what to do anymore or who to approach, so that I can also be allocated an RDP house. It’s been almost 20 years that I’ve been staying in a dilapidated one-room house with my 26-year-old son,” said Mbedzi Fulufhedzani (53), a resident from the Tshitereke area outside Thohoyandou.

No signs of life are apparent as one approaches Fulufhedzani’s home, which is surrounded by big fruit trees. When visiting her at her home, Limpopo Mirror noticed her black pair of shoes on the doorstep, but she was inside and unaware that someone was approaching her home.

When she starts speaking about her ordeal, she gets emotional and explains that many of the younger people in the area have received RDP houses. “No-one explains to me why I’m not allocated an RDP house too. My house has a big crack. It is dangerous staying in this house,” she told the reporter.

Her son is currently studying electrical engineering at the TVET college in Mpumalanga. According to Fulufhedzani, her small house is no longer safe for her. “I have to go to bed early (in the evenings). I am afraid anyone can come and rape me because I stay alone, and my door is not well fixed. It is better inside, but I still fear that the house may collapse one day while I am inside,” she said.

The reporter also spoke to a concerned neighbour of hers from the community, who asked to remain anonymous. “It is a concerning matter seeing younger residents who are able to work and build houses for themselves being offered RDP houses. Fulufhedzani is always left behind. In our culture it’s not acceptable for Fulufhedzani to sleep in the same room as her 26-year-old boy. Authorities should attend to this as a matter of urgency,” he said.

Responding to Limpopo Mirror’s enquiry on the matter, the spokesperson for Thulamela Municipality, Nndwamato Moses Tshiila, gave some insight around the situation.

“In 2016, Fulufhedzani refused to be allocated an RDP house. There is nothing we can do when one is not interested in a house. However, in 2017, Fulufhedzani indicated that she needed the RDP house, but the allocation was already done (to someone else). We are not sure when we will get the next batch of RDP houses, but once a house can be allocated, Fulufhedzani will be our top priority,” he told the reporter. He added that the Covid-19 regulations prevented the municipality from holding an imbizo in the area, thereby preventing the mayor from doing something for Fulufhedzani.