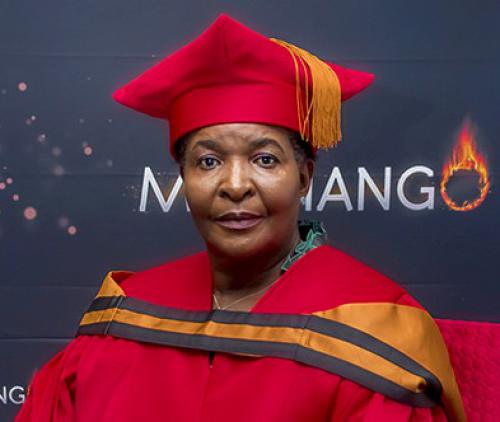 Regina Nesengani, aka Vho-Masindi in the TV series Muvhango, obtained her PhD at the University of South Africa (UNISA). Picture supplied.

Regina Nesengani, better known as Vho-Masindi on the television soapy Muvhango, recently obtained her PhD degree at the University of South Africa (UNISA).

She got her inspiration to further her studies after listening to an interview with an old lady on SAFM who had just graduated with a PhD. “I was very inspired by this lady,” she told the media. “I said, if she can do it, so can I. I already had a master’s degree, so nothing was stopping me from pursuing a PhD.”

She said that juggling her studies with her Muvhango duties had not been easy, as both had required a lot of her attention.

The topic of her thesis was motivated by the prevalence of gender-based violence (GBV) in her community, even back when she was still studying for her master’s degree. After her master’s degree, she researched more on the topic of GBV and said she had made some shocking discoveries, of which many dated as far back as the early 70s.

“I discovered women that were abused in the Bible,” she said. “I was shocked to learn that even women abused each other. I then made a proposal to my supervisor around the topic, and I got approval to proceed with the topic.”

She said she realised that many women were not happy in their homes, and she was also touched by a lot of stories of women who were abused by their partners. “I was shocked that this was still happening in 2020, with all the awareness and education on GBV.”

Her thesis was about the abuse of women through dialogue in dramas written by male writers. The contention of the thesis was that most, if not all, the dramas were written by men. “Women are often portrayed in a very negative light and are hardly portrayed as intelligent creatures who can think and make decisions for themselves,” was her argument on the subject.

Nesengani chose to do her thesis in Tshivenda to emphasise that the language is in fact also one of the official languages in South Africa, and said she hoped that her study would add to the body of literature and knowledge on GBV-related problems.

Born in Tshianzwane village, Nesengani used to be a teacher. She started her teaching career in 1975 after completing her Primary Teachers' Course at Tshisimani Training College.

This 65-year-old grandmother of 12 grandchildren, who completed her master’s degree while she worked as a primary-school teacher, is also a radio drama actor who has been in the acting industry for more than 30 years.