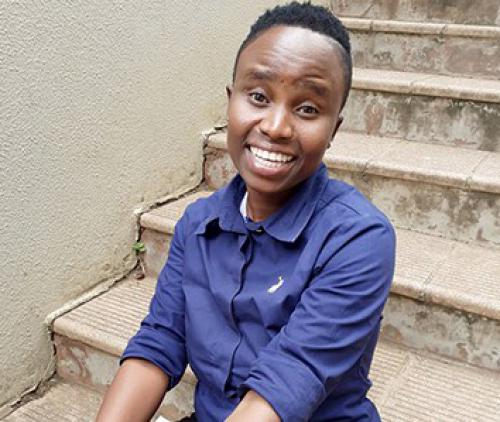 Matodzi Rechel Rabulanyana is a woman who believes that, in order to excel, one has to get up and work towards achieving one’s goals because doing so comprises hard work, dedication and passion.

Rabulanyana was raised with her three siblings by their single mother and had no funds to pursue her studies at varsity. However, she was lucky enough to secure a NSFAS grant that enabled her to finish her BA Criminal Justice degree at the University of Venda (Univen).

“I was so overjoyed when I received the good news that I had been accepted to study, but I had no money to settle any study fees because my mother was unemployed at the time,” she said. “I applied for NSFAS and the application was successful.”

The study grant spurred her on to pull up her socks.

“I graduated in 2009,” she said. “Somehow, I could not instantly get a job with that degree. In 2011, I found work as a receptionist at a medical institution. This was a different area from what I had studied, but I accepted the fact that I had to start somewhere if I needed to get somewhere in life.”

She had a desire to further her studies and this dream was initially put on the right track when she went back to do her LLB (Bachelor of Law) at Univen. “I graduated in 2016 and started to look for a place to do my articles of clerkship but could not find any space to do them. That was a setback, but I did not let myself huddle in a corner and worry, for I had the willpower to establish myself in society as a functional social being.”

With two degrees in her bag, she found herself working as a call-centre consultant for some time before she was offered an opportunity to do her articles of clerkship at Legal Aid South Africa in 2017.

“Before I could even begin with that contract, my husband, with whom I have two kids, passed away in a motor-vehicle accident,” she said. “I was so devastated, to the extent that the mourning phase nearly derailed me. But then, at the end of the day, one has to heal.”

Rabulanyana’s contract with Legal Aid South Africa ended in 2019. She then found a position at Matshivhelm Attorneys in the same year. She worked harder, and her insights could not be ignored in the criminal courts, as she provided strong arguments during court cases.

“In 2020, I opened my law firm under the name Rabulanyana MR Attorneys,” she said. “The reason why I am sharing this story is because I want other people to know that it is possible to make it in life, regardless of challenges you meet along the way. I am a single mother and fighting for a better life for my kids.”