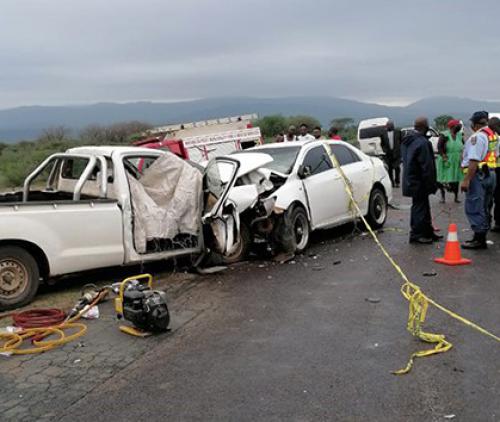 The two vehicles collided in a head-on accident on the D959-road. Four people died in the crash.

Four people, three from one family, were killed and two are still in a critical condition after a head-on collision between two vehicles on the D959-road next to Madombidzha.

The accident occurred on Sunday morning (13 December). Paramedics and other emergency services arrived on the scene to find the two vehicles on the side of the road. Two passengers died on the scene, while the other two died on arrival at the Louis Trichardt Memorial Hospital.

Traffic came to a halt while rescue workers tried to retrieve bodies from the mangled wreck. Traffic police had to battle to clear the road from curious onlookers, who blocked the road in their attempt to have a glimpse of the scene.

According to police spokesperson, Motlafela Mojapelo, Eric Malange (76), his wife Tshinakaho Malange (73) and Anna Ratshilingana (72) were on their way to Nthabalala to attend a funeral when the Toyota bakkie they were travelling in collided head-on with an oncoming sedan. The child who was in the vehicle with them was still in hospital at the time of our going to press. Aberame Atiso Eromo (32), the driver of the sedan, also died in the accident.

The exact cause has still not been determined, but speeding and reckless driving could have contributed to the accident.

The Malange family’s spokesperson, Michael Malange, said it was sad that they had to lose three family members on the same road that had already claimed several other lives. Only two weeks ago, the provincial government promised that the D959-road would be fixed soon.

“We have lost three members of our family and one child is still admitted. So, we are in a lot of pain. We don’t know what to say, it’s a great loss. Even the community of Madombidzha is crying with us,” Michael said.

Limpopo Transport and Community Safety Department’s MEC, Mavhungu Luruli-Ramakhanya, has sent messages of condolences to those who were involved in this tragic accident, but said she was equally concerned about the continuing number of fatal accidents.

Luruli-Ramakhanya urged motorists not to drink and drive. “Let us rest if we feel tired. It is now the festive season, and people must be very careful when driving,” she said. “Traffic laws, no matter how trivial they may seem, are proven methods that help increase the safety of people travelling on or near roads. Failing to adhere to these laws might lead to prosecution or, in worst cases, somebody being killed,” she said and further reminded motorists that traffic officers will be everywhere during this time.

The three deceased Malange family members will be buried in Madombidzha on Friday, 18 December. Ratshilingana will be buried at Tshikhwani Cemetery on Saturday, 19 December.