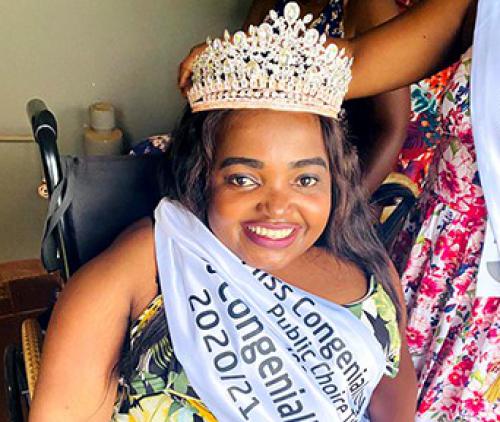 Rendani Munyai was crowned Miss Congeniality 2020 on Saturday, 5 December at the Vevisa Lodge near Muofhe Graceland.

Rendani Moraine Munyai is smiling from ear to ear, and with reason. She was selected as Miss Congeniality 2020 during the crowning event held at the Vevisa Lodge near Muofhe Graceland on Saturday, 5 December.

Munyai (23) is a second-year student at the University of Venda (Univen) doing her bachelors’ degree in social work and psychology. To her, winning the title of Miss Congeniality has opened a lot of doors. “It is proof that indeed God works in His own time and is willing to lift me up and make me an example that no one can stand in your way when God has opened his doors for you,” she said.

She was born and bred in Maniini village outside Thohoyandou and grew up as an orphan, living with her grandmother. She said she was very happy and excited that she had won the title. She hopes to inspire and encourage other disabled girls.

Miss Congeniality is the brainchild of visually impaired former educator Bele Ramunenyiwa from Thohoyandou P West. The whole purpose of the competition, she said, was to encourage disabled young people to be confident and appreciate their beauty, regardless of their disabilities. Ramunenyiwa (52) had been an educator for 22 years before she became visually impaired in 2013.

Munyai won R1 000, sponsored by Black Leopards, a cellphone from Choice FM, spa treatments from Tshavhudi Hair Salon and a weekend away at Thavhani Guest House. “I think these will really change my life,” she said gratefully.

Vhonani Netshikhudini won the category for Intellectually Impaired Girls. According to Ramunenyiwa, this year’s contestants were fabulous and very beautiful. She said that the competition was really tough, but that the winners had worked hard and shown a lot of dedication, despite living with disabilities.

Ramunenyiwa encourages girls who wish to contend for next year’s Miss Congeniality title to get ready. For more information on the competition, she can be contacted at Tel 079 031 1253 or her daughter, Denga Netshiheni via WhatsApp on Tel 078 740 1647.

Vhonani Netshikhudini won the Intellectually Impaired category during the Miss Congeniality competition held on 5 December at the Vevisa Lodge near Muofhe Graceland.