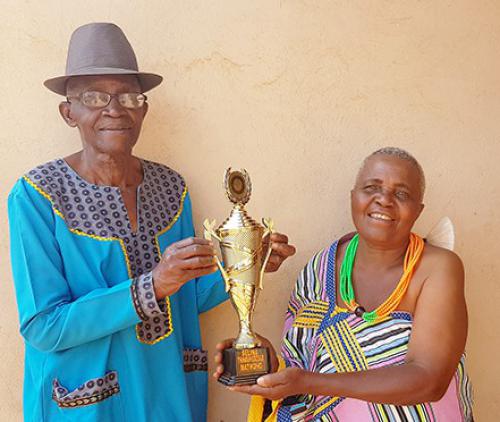 “My wife deserves a trophy - so I gave her one”

If you want to know what true love is, ask this elder, Mr Jutas Kanakana Mathoho (82) of Tshiombo village, outside Thohoyandou. Mathoho had surprised his wife, Selinah Thinavhudzulo Mathoho (67) with something very unusual. He presented her with a special trophy engraved with her name to recognise her loyalty and support throughout their 54-year-long marriage. The couple were married in 1966.

Mathoho said he decided to do something for the love of his life after realising that Thinavhudzulo has been there for him in good and difficult times. “It took a long time for me to decide on what to do for her, because she is a unique woman who deserves something unique. I thought that if I bought her a mobile phone or a watch, that could easily get lost or stolen and it would not serve any purpose. I then decided on a trophy because it is something that is not easily destroyed. It will form part of history even when we have departed from this earth because our grandchildren will be able to see that I have honoured their grandmother with this special trophy.”

The old man said that he had spent a fortune to buy and engrave the trophy for his wife. “For someone like me who survives on an old-age grant, R1 200 is a lot of money, but it was worth it because I have done it out of love for my wife.”

Mathoho explained that the 54 years of their marriage had not always been smooth sailing, as they also had differences like any other couple. “Being with her has been something very special for me. It became easier for us to resolve our challenges because we regard communication as a pillar of every successful marriage. I don’t regret making her part of my life, because I have achieved many things because of her support. I hope what I have done for my wife will be an inspiration to other people, young and old, to love and appreciate their partners.”

Thinavhudzulo said she did not have enough words to thank her husband for the big surprise. “He planned everything without informing me, and I was very surprised when he presented me with a special trophy. This honour is something that I will cherish for the rest of my life. I’m really humbled by what my husband has done for me. I pray that God should bless him with many more years, so that he could continue to take care of me and show me what true love is.”