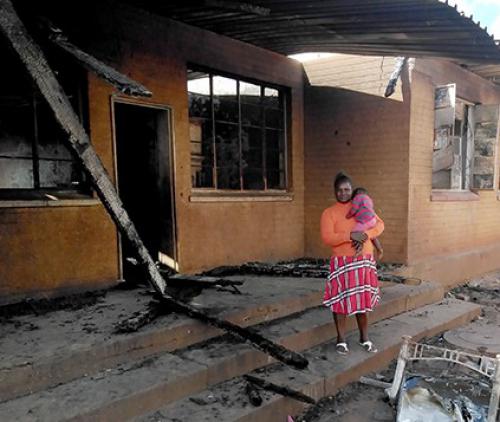 Lucy Seluma tells how she managed to rescue her eight-month-old baby from the fire.

A mother’s instinct to save her baby probably drove a young woman from Musina to rush into a burning building and rescue her eight-month-old child.

The incident happened last week at the Campbell residential area in Musina. A house with eight rooms caught fire, causing immediate panic. Eight families stayed in the house. Lucy Seluma is one of the roughly 30 people who lost possessions in the fire. For her, however, the situation could have been far worse. In the confusion, she did not realise that her baby was still in the room where she stayed.

“I rushed outside to alert my neighbours to the fire. In no time, the whole roof was on fire,” she explained. Only when she was outside did she realise her baby was still inside. She ignored the heat of the fire and rushed back in to grab her child. “I braved the heat of the burning pieces of timber falling from the roof to rescue my child,” said Seluma.

She said that she and her husband had been staying in a room in the house since 2004. “I completely lost all my belongings,” she lamented. Seluma and her family are now temporarily staying at her mother’s place.

Another victim of the fire, Berita Maruwanda, also lost all her belongings. She tried in vain to jump through a window to collect her belongings, but the heat was too intense. “I broke the window and tried to jump in, but I failed,” she said.

Maruwanda (31), her husband and their four children are temporarily staying with her uncle. They had been living in the house for the past eight years

Wilson Dzebu, Musina Municipality’s spokesperson, said that the municipality had learnt about the disaster with shock. “We have sent our councillors and social workers to do an assessment and advise on the type of intervention and assistance needed by the families,” said Dzebu.

Meanwhile, the Musina Community Economic Development Committee (MCEDC) has called for donations of all sorts to help the families. On Saturday morning, some of the affected families received bread and clothes from the community structure. Later that day, the victims also received more donations, including blankets. “We will continue to monitor the situation,” said Mmanare Semenya, secretary of the MCEDC.

The victims have all arranged for temporary accommodation.