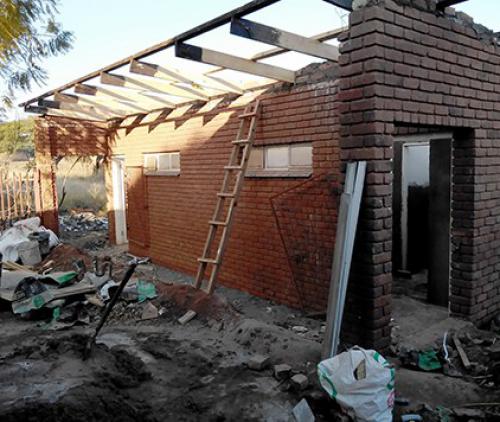 The girls' toilet under renovation by a contractor from the NLC.

At long last the National Lotteries Commission (NLC) appears to be prepared to make good on its promise to build proper sanitation facilities at Waterval High School. A construction team arrived at the school earlier this week to start renovating the existing ablution blocks. The pupils, however, cannot return to this school while the work continues.

On Monday, pupils were patiently waiting around at the entrance to the school. The school governing body (SGB) instructed the learners not to enter while the school tries to secure proper sanitation facilities. Grade 12 learners reportedly had to be accommodated at a nearby primary school last month because of the state of the ablution facilities at Waterval High.

Robert Ngobeni, a member of the SGB, said that they expected the renovations to be completed soon and that the learners could return to classes. The first phase entails renovating the existing dilapidated toilet blocks. The NLC also promised the school that an additional four-seater boys’ and a four-seater girls’ toilet would be built. A separate toilet for disabled children is also in the pipeline.

The school had to wait more than a year already for the NLC to make good on its promises. In April last year, the learners embarked on protest action to complain about the terrible state of the ablution facilities. The school was mentioned as one of the beneficiaries of a sanitation project funded by the national lottery – fact that had been announced previously with some fanfare.

The NLC gave a Soshanguve-based company R10 million to build ablution facilities at schools in Limpopo. The initial announcement indicated that 10 schools would benefit from the grant, but when pressured to do so, the NLC could only provide the names of eight schools. At the time that the protest erupted, the company responsible for the sanitation project was claiming that the new ablution facilities at Waterval High had already been built.

When the NLC delegation arrived at the school on 25 April to hand over the facilities officially, they had to concede that the project had been a disaster. The NLC’s representatives cancelled the event and admitted that the work done was not up to standard. The NLC promised that the matter would be addressed.

More than a year had to pass for the gears to get in motion, amidst a lot of confusion. Waterval High’s SGB started looking at other alternatives to fund the building of the ablution facilities. What also became clear was that very little communication was taking place between the NLC and the Department of Basic Education (DBE). The NLC consistently maintains that their proactive funding projects (such as the school sanitation project) are the result of research and collaboration.

When the Minister of Basic Education, Ms Angie Motshekga, responded to a question in parliament on 11 May this year, she effectively denied that this was the case. She responded to a question asked by parliamentarian Ms Desiré van der Walt. Van der Walt asked her about the lotto-funded sanitation project in Limpopo and the Eastern Cape and specifically how her department was involved in this.

Motshekga said that the DBE had liaised with the Provincial Education Departments (PEDs) to find out about the lottery donations. “However, the PEDs have no records of any funding that was obtained/donated by the National Lotteries Commission, as this donation could have been directly donated to the respective schools. The DBE will contact the commission in order to obtain the list of those schools that may have benefited from the donation,” she said.

In parliament, what also transpired was that the NLC itself was either ignorant about the state of the various projects or was not disclosing all details. On 20 May this year, the Minister of Trade, Industry and Competition, Mr Ebrahim Patel, also had to respond to a question from Van der Walt about the lotto-funded school sanitation project. Patel referred the questions to the NLC’s commissioner, Ms Charlotte Mampane.

Mampane said that 10 Limpopo schools had benefitted from the project, but then mentioned only eight. “The 10th school (is) to be confirmed by the Provincial Department of Education,” she said. As far as Waterval High is concerned, she stated that the renovation was completed, but this was to be followed “by (the) construction of the additional block of ablution facilities”.

When the country’s secondary schools opened for Grade 12 learners on June 8, Waterval’s learners could not return, because the toilets were judged not fit for use. The SGB told learners to report to the nearby Hlalelani Primary School for classes instead.

A month later, they returned with renewed hopes, only to be turned back. This time, however, a construction team was busy renovating the ablution blocks. The lack of communication was still evident, with ten temporary toilets being delivered at the school over the weekend without the SGB’s being informed.

“We are not sure who dropped the toilets here, neither do we know who is to take them away at the end of the day?” said Ngobeni. The Limpopo Department of Education was contacted about the temporary toilets. Tidimalo Chuene, spokesperson for the department, said that the department was sourcing chemical toilets for schools that had been identified to have sanitation challenges.

Chuene said that the department was looking into reasons why the wrong type of toilets had apparently been delivered at Waterval and would engage with the service provider. “The school has a right not to accept delivery of anything different from our procurement specifications,” said Chuene.

When Limpopo Mirror visited the school on 6 July to check on the progress of the toilets, Grade 12 learners were waiting around at the entrance. They can no longer be accommodated at the primary school, as this school needs to make provision for the returning Grade 6 pupils.

“This issue of toilets is taking us back. We have been in lockdown for some months and not having any lessons; now I wonder whether we are going to catch up. I never had any lessons (at) home because we do not have a radio or television,” said a Grade 12 learner.

The boys' toilet under renovation by a contractor from the NLC.