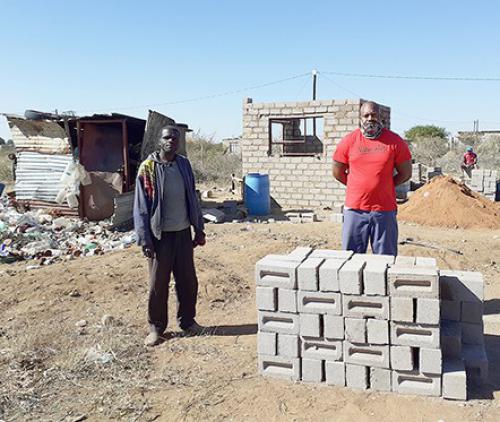 A 46-year-old man smiled with joy as builders laid the foundation of his two-room house at Tshiozwi village last week.

This comes after the Vhathu Ndi Mapfura Foundation and some community members had come together and contributed some building materials to ensure that a house would be built for indigent resident Vho-Pandelani Terrence Ratshipangana.

“It had come to my attention that Vho-Ratshipangana had no stable shelter, a toilet and fencing around his yard in which he has been living for many years,” said the director of Vhathu Ndi Mapfura Foundation, Musanda Vho-Makhado “Vhathundimapfura” Sinthumule. “Being a traditional leader in the very village, I then made a call for able residents to contribute some materials to ensure that we build a house and a toilet for this other resident.”

“We really feel honoured about this massive response from those who deemed it fit to help us to build a house for one of us,” he said.

Local informal and small service providers were invited to come and build the house, so that they could also earn something.

Mr Pandelani Terrence Ratshipangana said that he was very happy about the house, which is now above window level. “I was sleeping with my assortment of recycling matter, which included bottles, tins and cans, in my tiny shack,” he said. “I had to keep everything inside the shack because there was a time when silly people came to steal my cans. Now I am very happy that Vhathundimapfura is building a proper house for me.”

Sinthumule said that an elderly couple were also in need of shelter. “It is good that people who are willing to restore the dignity of the indigent do contact us and see how best they can contribute,” he said.