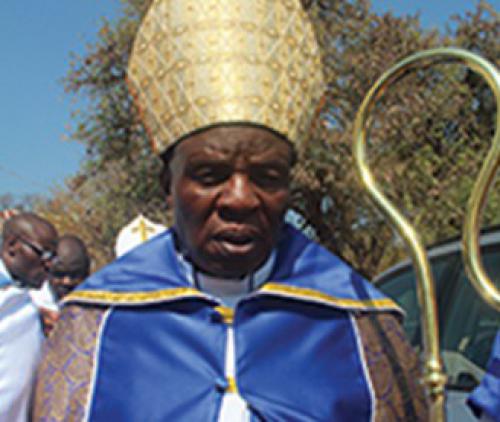 Archbishop David Mureri of the UAAC.

Most of the big churches in the Vhembe area announced the past week that drastic steps will be taken to help control the outbreak of the COVID-19 disease. Even the country’s largest church, the Zion Christian Church (ZCC), announced that the annual Easter gathering at Moria will be postponed to a later date.

According to the spokesperson of the ZCC, Rev Emmanuel Motolla, the church had decided to postpone its annual Easter conference and would announce a new date once normality had been restored. He said that the church’s leader, Dr Barnabas Lekganyane, had taken the decision last Friday (13th), after the church leadership was briefed by a national government delegation, led by Health Minister Zweli Mkhize.

Many churches have already brought in measures to avoid exposing members of their congregations to the virus. The Limpopo MEC for Health, Dr Phophi Ramathuba, visited different churches on Sunday to alert them about the danger of the coronavirus. She also met with the South African Council of Churches to discuss preventative measures.

The leader of the United African Apostolic Church (UAAC), archbishop David Mureri, released a statement earlier this week, saying that the annual Easter gathering had been suspended. This is in line with the announcement made by President Cyril Ramaphosa on Sunday, prohibiting the gathering of more than 100 people as a prevention method.

The UAAC is one of the biggest churches in Limpopo but has followers throughout the country. Archbishop Mureri also urged church centres to follow the government’s guidelines on maintaining proper hygiene. “It is vitally important to maintain connection with the community as a church during this health crisis and so we will be live-streaming our Sunday services in order that we maintain our spiritual health and not our physical health only,” said Mureri. The UAAC will communicate with its members when the situation may change.

As far as normal church services on Sundays are concerned, Mureri said these would be restructured. The various congregations will need to conduct services in different time slots and arrange with churchgoers which of those to attend, to avoid big groups’ coming together. “The health of our congregation is our priority,” said Mureri.

The True Worship Christian Centre at Kutama, another church group that attracts more than 1 000 people every week, announced that it had postponed its Easter conference because of the coronavirus outbreak. Apostle Elias Mudau, the church’s leader, called on members of the church to adhere to the restrictions and not to hold gatherings where more than 100 people are present. He said that they were going to open centres around the area that could accommodate fewer than 100 Christians every Sunday. He also mentioned that they were going to schedule time for church services from 10:30 to 12:30 and from 12:30 to 14:30, to try and break up bigger groups.

The South African Council of Churches’ chairperson in Limpopo, Rev Awedzani Nemaukhwe, said that the council supported the call of Pres Ramaphosa that churches in high-risk areas should play a leading role in preventing the spread of the coronavirus. “Some individual churches have taken steps themselves on how they will be dealing with this matter, but we also need a unified approach,” he said. He appealed to all churches to limit services to groups of fewer than 100 people.