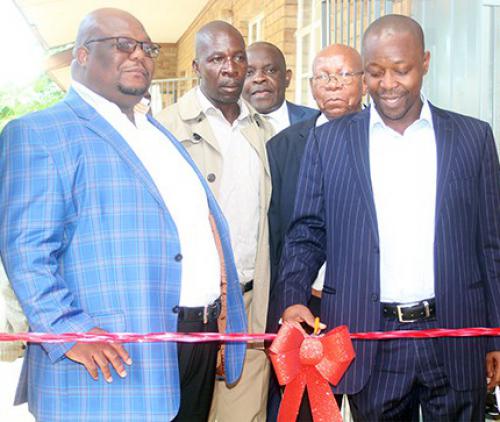 Maths and Science centre for Ramauba

The centre at Ha-Masia was donated by The SA Medical and Education (Same) Foundation.

The new centre is fully air-conditioned, provides for 31 computers and is the result of the school’s declared policy of keeping abreast of the latest computer technology in the interest of all its learners.

The pupils from Grade 10 from different secondary schools around the area are computer literate and receive Saturday classes. The centre accommodates more than 200 learners.

The centre has five well-equipped laboratories. Among its aims are to expose the disadvantaged rural pupils to the potential of the application of maths and science in their future studies and in the workplace, building knowledge and expertise in the use of science and technology and empowering neighbouring rural pupils who lack those facilities.

According to Mr Tyrone Pols from the Same Foundation, the donation comes as a gesture of social responsibility. “We noticed that many rural pupils were struggling, and schools were unable to give computer and science and maths skills to learners because of a lack of computers,” he said. “Then we knew that it was our social responsibility to equip these pupils with computer lessons.”

He said that the centre could also have access to new technology. “We are living in times that demand for each one of us to be computer literate in order to get along well with the different modes of communication,” he added.

Mr Elijah Mhlanga from the Department of Education added that the donors had left a legacy for many disadvantaged learners, especially in the rural areas, who were not equipped with proficiency in maths and science subjects. "Not only does this affect job opportunities negatively, but also impacts on the South African economy, which is already faced with a skills shortage," he said.

Thovhele Vho-Nthumeni Masia was over the moon. “I cannot describe how I feel. We are very excited, and we will make the most of this generous gesture,” he said. Masia said the donation of the centre would enhance the pupils' scope of learning. “This gift only indicates that we believe in education and our pupils. We are living in a world of digital technology where it has become a must for each school to have a well-equipped computer laboratory,” he added