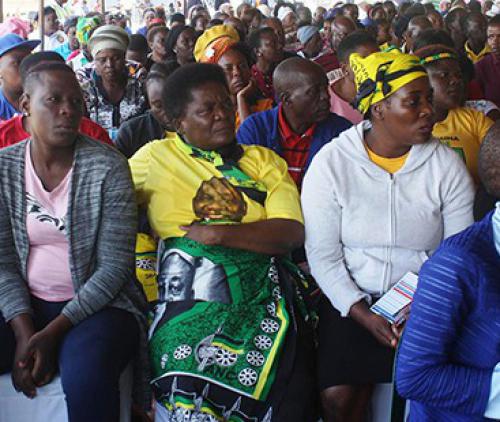 Some of the community members who attended the launch of the Vhembe Development Model.

Premier Stan Mathabatha told the communities in the Vhembe District to use water sparingly as water is a scare commodity.

Mathabatha was speaking on Friday at Makhuvha stadium outside Thohoyandou when he launched the Vhembe District Development Model at the stadium.

The aim of the development model is to ensure that the five districts in the province have one district plan, with one budget to promote the bringing of services to the people.

He said the launch of the development model was about a different approach to service delivery. He mentioned in his recent State of the Province address that the government had managed to place the province, which is mainly rural, on a pedestal for a higher growth trajectory.

“It is within this context that we are implementing some of the major catalytic projects, which are aimed at stimulating economic growth and job creation. These include the Musina-Makhado Special Economic Zone (SEZ), the proposed Tubatse SEZ, the revitalization of the industrial parks, agricultural and several mining initiatives. With the additional investment commitment of R6.1 billion US dollars, the number of projected jobs to be created by the Musina-Makhado SEZ project has since been revised upward from initial 21 000 to 26 000 jobs,” said Mathabatha.

According to him, the Vhembe District Municipality is known as the fruit basket of the province and agriculture is one of the identified pillars for growing the economy of the province. Vhembe also houses the Nwanedi Agri-Hub, which serves more than 200 rural farmers who are packaging and sending their agricultural products to the South African market and the rest of the world.

Thovhele Gole Mphaphuli welcomed the launch of the Vhembe Development Model, saying he hoped the communities around the region would benefit in terms of job creation.

Mathabatha and his MECs also visited and inspect the Thohoyandou intermodal taxi rank and promised the people that they were working hard to ensure the rank opened and served the commuters in the region. “We understand that the rank should have opened some eight years ago, but we are working around the clock to make the rank be used by commuters. We are now finishing some of the structural damages to the rank and very soon, it will be ready to be utilized,” said Mathabatha.

The chairperson of the South African National Taxi Council in the Vhembe region, Mr Balanganani Shandukani, said the government’s plan was wise and a good effort to improve public transport. He added it was just misfortune that buses and taxis were still not able to use the rank as expected, but some hope that the rank would finally open still existed.